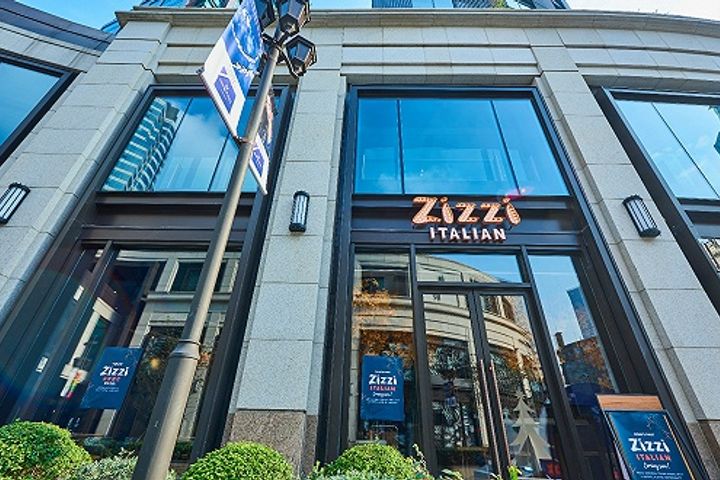 Zizzi, opened in 1999 and owned by British restaurateur Azzurri Group, is a creative eatery featuring pizza and pasta and other Italian foods. It has 162 outlets in the UK and Ireland.

The Shanghai outlet invited Chinese artists to design murals with phoenix, sycamore, and Italian tomato themes to better integrate with local consumption culture. A tree grows from the ground to the second floor in the middle of the restaurant.

Whether the design and overall look is instagramable is one of the factors that Zizzi considered when opening the store. The company hopes to attract more young people to discuss Zizzi on social media, Steve Holmes, Azzurri Group chief executive said in an interview with Jiemian News.

About 70 percent of the dishes in the new restaurant are the same as those in the UK, while the rest are adapted to local taste. Pizza still figures prominently on the menu, priced from CNY118 (USD17) to CNY168, but the Shanghai outlet has more entrees with meat and seafood, and more options for hot tea, juice and other drinks than its UK counterparts.

Survival in China's cut-throat food and beverage market is no cakewalk, however. Shanghai and other first-tier Chinese cities have become the first choice for ever more overseas food and beverage firms to expand their business.

Japan's dessert brand LeTAO and coffee chain % Arabica entered this year, and New York-based famous hamburger brand Shake Shack will also open its first store in the eastern megacity next year. How to capture Chinese consumers is the challenge they all face.

Zizzi plans to open one or two more stores in Shanghai next year based on the performance of the first, Holmes said.