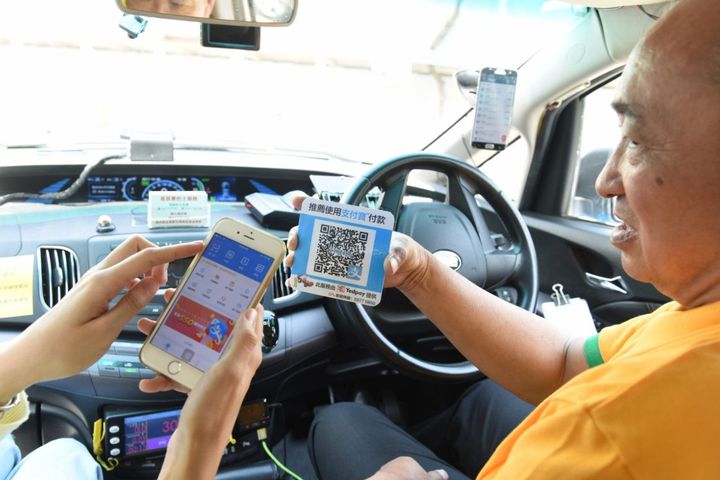 The first fleet of dozens of Alipay-receptive taxis are already plying Hong Kong's streets, allowing passengers to pay their fares via the Alipay app or its Hong Kong-specific version, and with thousands of cabs in the city coming aboard next month, state-run Xinhua News Agency reported.

Ant Financial Services also held a cooperation ceremony for Alipay and Hong Kong's taxis yesterday. The first fleet of such taxis with the slogan 'Hong Kong also uses Alipay' painted on their vehicle bodies left Hong Kong Stadium to tender their services. A passenger now needs only open the Alipay app or the Alipay HK app, scan the driver's QR code and then enter the fare or let the driver scan their user payment code, and complete the payment procedure by verifying their password. An e-invoice is then sent to the passenger. Alipay does not charge any fees for the service.

A mainland tourist visiting Hong Kong surnamed Zhang said she has grown accustomed to paying fares with mobile phones on the mainland and finds it inconvenient that mobile payment is not more accepted in Hong Kong. She believes that taxi services are an important part of a city's tourism portfolio and Hong Kong taxis' acceptance of Alipay represents an upgrade to the city's tourist services.

Alipay's availability will tighten the partnership between it and Hong Kong's smaller merchants and help taxi drivers improve operating and fee-collecting efficiency, Lee said, adding that she hopes it will also contribute to the special administrative region's efforts to build a smart city.

Alipay HK debuted in May, supporting payment in Hong Kong dollars. The app attracted over 100,000 active users in the first two weeks of release. More than 10,000 merchants in Hong Kong now accept Alipay and some 5,000 take Alipay HK.