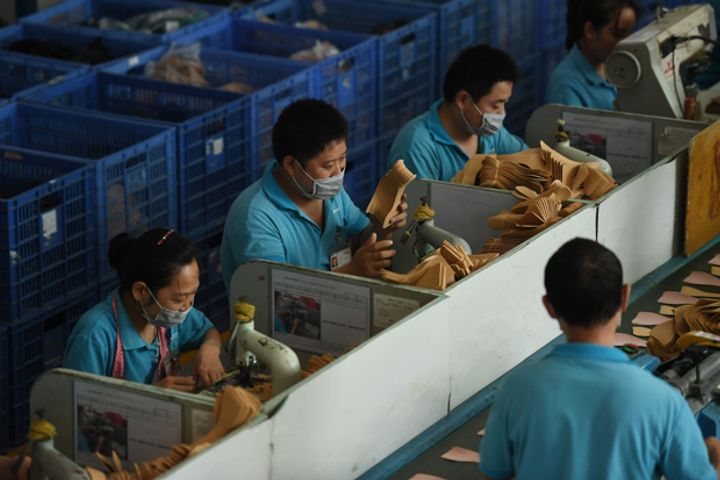 Why Dongguan Shoemakers Spurn Orders Under USD20 Per Unit

(Yicai Global) Oct. 16 -- Shoe factory owners in Dongguan in southern China's manufacturing hub of Guangdong province were not caught flat-footed since the US imposed a 10 percent duty on USD200 billion in Chinese imports, even though finished footwear is not on the tariff list.

But falling orders, rising raw material costs, and uncertain future prospects have pushed many factories to resort to countermeasures.

"The impact will be slight" even if finished footwear is included on the list, however, said many shoe insiders Yicai Global interviewed. This is because a consummated, mature and efficient global supply chain backs up Dongguan's producers.

Large shoe producers here -- such as Nike suppliers -- scattered their factories around the world a decade ago, including nearby East Asian and faraway African countries, said Li Peng, secretary-general of the Asian Footwear Association, who has studied shoemaking in Dongguan for nearly 20 years. The city's footwear manufacturers can thus overcome trade frictions by adjusting internal capacity, he noted.

The township of Houjie, which is under the city's administrative umbrella, introduced and cultivated its own footwear sector over 30 years ago. The town lured many shoe companies from outside the mainland -- the vanguard from Taiwan -- to settle down there and a large-scale international footwear manufacturing cluster thereby gradually formed.

About 4,000 companies in Houjie produce and sell leather, shoe materials, shoe machines, hardware and accessories, among which 300 are production machine makers, 800 traders and buyers, with another 5,000 workers from the US, Brazil, Japan and other countries who live in the town and produce, trade and buy footwear, statistics show.

The US announced its imposition of a 10 percent tariff on Sept. 17 on USD200 billion of Chinese imports starting Sept. 24 and also said it will otherwise escalate the situation. Finished shoes are not now among those sanctioned, however.

Waiting for the Other Shoe to Drop

Dongguan Changjian Shoes Industry's received fewer than expected orders after the announcement of the tariffs, Tong Shuishun, its chairman, told Yicai Global, adding some were diverted to other Asian countries such as Bangladesh.

"The reason is customers' change of heart," Tong said, "although finished shoes are not included now, it is difficult to say what the future holds. With this expectation, we can understand why our customers have shifted some of their orders to factories in Southeast Asia."

Dongguan Yongdu Shoes is another producer settled in Houjie. Its outdoor functional shoes impose high technical requirements. The company's orders have not fallen thus far, but costs have risen as rubber and other raw materials are included on the tariff list, Xu Wenxiong, its general manager, told Yicai Global.

"Our single factory uses over one hundred tons of raw materials per month. Chemical raw materials such as rubber originating in the US were subject to an 8 percent tariff before, and the cost of raw materials will rise by CNY5,000 to 6,000 (USD722 to 867) per ton a month after the tariff rises to 25 percent," Xu said.

He is quite untroubled about the cost increase, however, because substitutes for these raw materials are available in China, Japan, and Thailand, and this ensures production will go on.

Shoemakers in Dongguan have also taken other actions to abate the risks China-US trade frictions pose. "Companies must try their best to withstand the adjustment period," in Tong's words.

Changjian Shoes Industry is speeding the expansion of its domestic market, and the company has set up an automation transformation department in the hope of further improving efficiency and lifting its competitiveness.

"We still have confidence; survival is not a problem after all. We will take advantage of this pressure to achieve Industry 3.0 [automation] first, and  some manual procedures need to be at least semi-automated. Even if orders are transferred to Southeast Asia, 50 to 60 percent of the raw materials will still need be shipped from China -- so the machines will still run -- and money can still be made," Tong said.

Voting With Their Feet

Many large shoemakers have set up factories overseas, and thus it will not be hard to bypass the barriers of higher duties, Li told Yicai Global. For example, for the same brand, factories in Southeast Asia produce shoes for export to the US, even as their Chinese plants make them for Europe.

Many giant footwear producers such as Yue Yuen Industrial Holdings, Hua Jian Group, and Dah Lih Puh (Dongguan Luzhou Shoes, Dongguan Luyang Shoes) have been accelerating their migration to Southeast Asia and other regions since the 2008 outbreak of the global financial crisis.

Yue Yuen Industrial is an apt example. The company's production lines in Vietnam and Indonesia grew much faster than those in China during fiscal years 2003 to 2010. The capacity of its Chinese plants makes up about 25 percent of the company's total, but this figure dropped to 20 percent last year, while the output of its works in Vietnam and Indonesia rose to 44 percent and 34 percent, respectively.

Hua Jian Group, one of China's largest makers of women's shoes, set up a factory in Ethiopia in 2011, which mainly produces world-renowned brands such as GUESS, and which has an annual capacity of 2.4 million pairs. It is also the company's original entrusted manufacturing base for Africa's women's shoes.

The basic stability of the yuan exchange rate at a reasonable and balanced level and adjustment of the export tax rebate policy are all strengthening the ability of foreign trade companies to withstand risks.

Tong finds the 1 percent rise in the export tax rebate very impressive. Companies should do business just as before with the support of the government, maintaining old customers and expanding new markets, he said.

Dongguan, which has a large workforce that designs, researches and develops footwear, has become the world's most important distribution center for shoemaking professionals. Footwear production in Dongguan has added value with the industry's steady transformation and upgrading. One of the most obvious manifestations of this is a unit price increase with a decreasing export volume. Shoe factory owners in Dongguan now refuse orders at a unit price below USD20 in a reflex that may reflect their 'pride.'