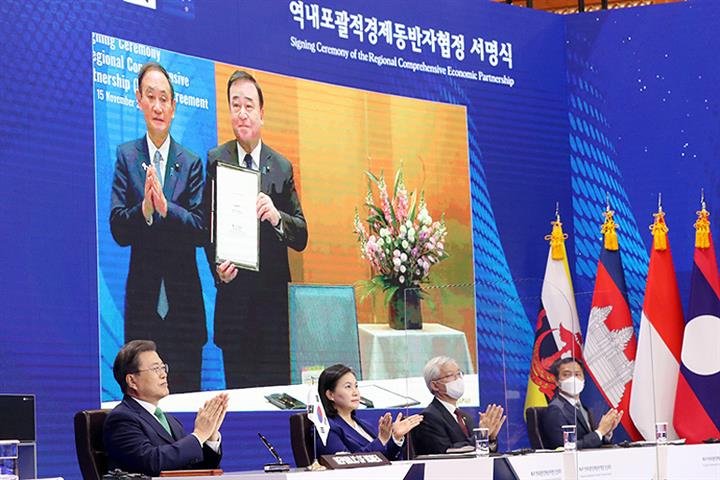 After eight years of negotiations, the 10 member states of the Association of Southeast Asian Nations as well as China, Japan, South Korea, Australia and New Zealand have signed a pact to create the world’s biggest open trading bloc. Together they account for around 30 percent of global gross domestic product and 30 percent of the world’s population.

The move is likely to promote discussions between the three major East Asian economies of China, Japan and South Korea and bring them closer to their own FTA, Yuan Bo, deputy director of the Institute of Asian Studies at the Ministry of Commerce told Yicai Global.

China, Japan and South Korea are the world’s second, third and eleventh largest economies. Together they account for over 70 percent of Asia’s GDP and around 20 percent of the world’s total, more than the European Union. So far, due to long-running disputes in the area, only China and South Korea have come to a trade agreement in the past.

The RCEP provides a better basis for negotiation, Yuan said. In a sense, it is the first mutual commitment between China and Japan as well as Japan and South Korea to open their markets to each other and lower tariff and non-tariff barriers, Yuan said.

“As the supply chain narrows, the economic ties of the three countries are getting closer and closer, making the signing of FTA agreements more necessary,” a source from Japan’s Ministry of Foreign Affairs told Yicai Global last year. This will be beneficial not only for the three nations, but also for the whole world, he added.

A China-Japan-South Korea FTA can be now reached using the framework of the RECP. It can be described as a ‘RCEP+’ cooperation, Yuan said.