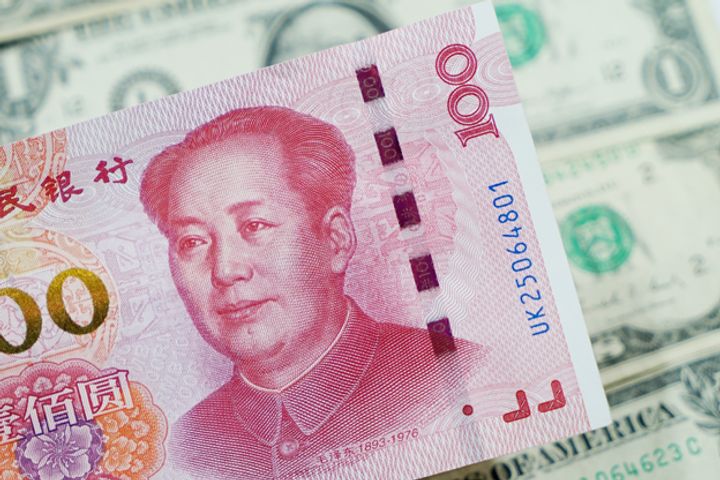 (Yicai Global) March 27 -- The yuan is rallying strongly against the dollar and has hit a 31-month high as trade disputes between the United States and China make their mark on the dollar index, which measures the American currency against six other major tenders.

China's central bank put the redback's central parity rate at 6.2816 prior to market open today, up 377 basis points from yesterday to mark the largest single-day hike since Oct. 11 and firmest rate since August 2015. The onshore price hit a daily peak of 6.2523 in early trading, its strongest since Feb. 7.

Dollar index futures were down to 88.66 as of noon today in a drop that could have been predicted, several market insiders told Yicai Global, saying recent trade frictions are having negative implications on the US economy and are pushing the dollar down.

"It was the market that pushed up the value of the yuan," said E Yongjian, chief analyst at the finance research center under state-owned Bank of Communications Ltd., adding that the rally was primarily the result of a weakening dollar index. Forecasts suggesting the European Central Bank and Bank of England will hike interest rates have also strengthened the pound and euro against the greenback, he said.

The US Federal Reserve's March 21 rate hike led to speculation that the greenback would get stronger late this month, forex analyst Han Huishi said, but it looks like the move has backfired in the short term.

"Once people start selling off the dollar and the yuan rallies, other investors will likely feel forced to sell too," Han added, saying the dollar's weaker-than-expected performance triggered a selloff among dollar bulls who wanted to keep losses in check, and that pushed its valuation down further. The rally wasn't driven by the People's Bank of China and unless the dollar climbs back, a strong yuan is set to stay, he said, also attributing the yuan's rise to growing risk aversion after the recent stock market crash.

The dollar has been hobbling because the US government has encountered financial difficulties, not because of excess liquidity, added Hong Hao, chief economist at BOCOM International Holdings Co., a subsidiary of the Bank of Communications. The US dollar is no longer a safe haven that protects investors from risk, he said.

The market insiders Yicai Global spoke to believe that with the continuous fall in the dollar index and fluctuations in the equity market, the yuan's latest rally correlates to the inflow of capital into the yuan market as investors went long on the currency as a hedge against volatility. The redback was also a safe option during the US stock market fall in early February, when it rallied to almost 6.25 against the dollar, they added.