(Yicai Global) Nov. 30 -- Since the conclusion of the Central Finance and Economics Committee’s August 17 meeting, “Common Prosperity” has been a very hot topic and the nature of the discussion suggests the concept is not well-understood.

According to a recent essay by Vice Premier Liu He, Common Prosperity is not about killing the rich to help the poor. It is not designed to promote egalitarianism and it will avoid falling into the trap of “welfarism”. Common Prosperity is intended to promote both high-quality development and ensure a reasonable distribution of development’s fruits. It is designed to encourage hard work and innovation while improving access to education and facilitating upward mobility.

Nevertheless, it is easy to understand the Leadership’s growing concern with the distribution of income. Over the last 40 years, China’s economy has grown exceedingly fast. One of the side effects has been a very rapid increase in income inequality.

Economists use an index called the Gini Coefficient to measure inequality. A Gini of “0” indicates perfect equality whereas one of “1” means that a single person has everything and everyone else has nothing at all. The average income Gini across all OECD countries (after taxes and transfers) is 0.32 (Figure 1). Inequality is relatively high in Costa Rica (0.49), Chile (0.46), Mexico (0.41) and the US (0.39). It is relatively low in the Slovak (0.23) and Czech Republics (0.25).

The Gini published by China’s National Bureau of Statistics (NBS) begins in 2003 (Figure 2). It shows that inequality rose to the end of the 2010s and has declined, although it remains fairly high by international standards. Researchers at the World Bank have estimated two sets of Gini’s for China – one for its cities and one for its rural areas – that extend back to the early 1980s. They are lower than the NBS’s figure because they do not compare across the two regions. However, they illustrate just how much inequality grew in the two decades following Reform and Opening Up. 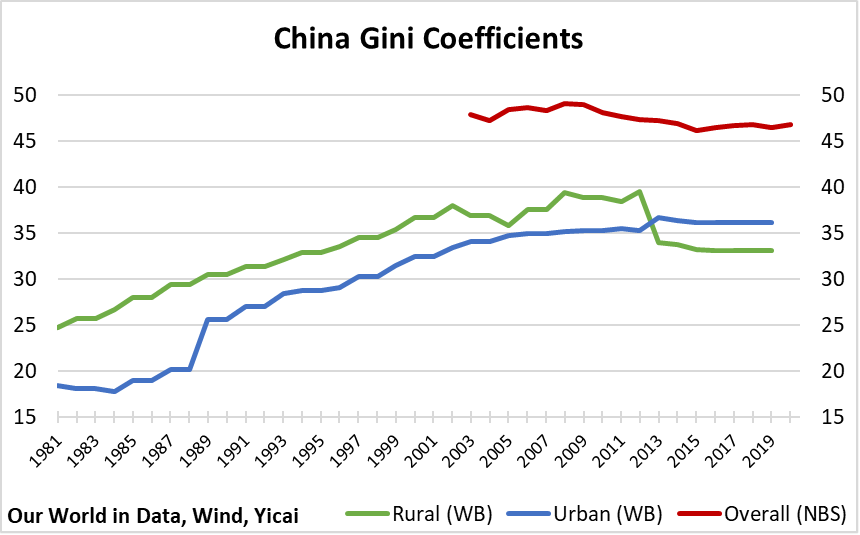 I think it’s fair to say that few societies could have endured the social tensions caused by their income distributions mutating from “Scandinavian” to “Brazilian” in just twenty years. China was able to keep things together because growth was so strong that even those at the bottom of the income distribution experienced tangible increases in their standard of living. Despite others getting rich faster, they continued to buy into a system that made them better off.

Looking ahead, President Xi has said that a doubling of per capita GDP to 2035 is possible. This implies average annual growth of just under 5 percent over the 15-year period. In contrast, growth over the previous 15 years was 12 percent. With the economic pie growing more slowly, the competition for the individual slices is bound to intensify.

The Leadership speaks of promoting Common Prosperity by coordinating the “Three Distributions.” The First Distribution arises from earning income in the market. In his recent analysis, Yao Yang – Dean of the National School of Development at Peking University – says that this distribution rewards ability, which conforms to Chinese culture and traditional moral beliefs.

The Second Distribution refers to how incomes are realigned through taxation and government transfers. Professor Yao says that the Second Distribution should aim to equalize people's ability to compete in the market. Even if absolute equality of opportunity cannot be achieved, China should move in this direction.

The Third Distribution is charitable giving. Professor Yao emphasizes that charity should be voluntary and not government-led.

This way of approaching Common Prosperity suggests that the Leadership wants to leverage the efficiency of the market to promote growth and then temper the outcomes through reinforcing the social safety net and encouraging altruism.

The government’s power to tax the wealthy and transfer income to the poor can be a powerful tool for reducing income disparities. On average, in OECD countries, taxes and transfers reduce the Gini from 0.47 to 0.32. That’s like going from “Brazilian” to “Portuguese” distributions. In the US, the government transfers nearly USD2.5 trillion every year – about 12 percent of GDP – through programs like Social Security, Medicare and Medicaid.

Taxes will likely rise in China to finance a stronger social safety net and the wealthiest will be called upon to shoulder most of the increased fiscal burden. But it would be a mistake to think that China is planning to return to the “iron rice bowl” style of socialism. Professor Yao says that a tradition of meritocracy runs in Chinese people’s blood. Yet he decries the reduction in intergenerational mobility and how difficult it has become for rural children to obtain a first-class education. He believes that more investment in schooling is the key to sustaining equitable distributional outcomes.

Professor Yao is skeptical of the role that charitable giving can play in ameliorating the distribution of income. However, he sees a role for specialized knowledge transfer and notes that the National School of Development’s alumni have a Charity Committee that trains leaders in rural villages. He also sees a role for charities in supporting science and art.

Perhaps Professor Yao underestimates the power of charitable giving. Americans gave USD471 billion in 2020, a 5 percent increase from 2019. While this is less than one-fifth the size of government transfer payments, it still amounts to more than 2 percent of GDP and, if deployed skillfully, these resources can do a lot to alleviate hardship.

Close to 70 percent of Americans’ donations were made by individuals in 2020, with corporate giving only amounting to 4 percent of the total. Foundations (19 percent) and bequests (9 percent) accounted for the rest. The average American household typically donates between 4 and 5 percent of its income to charity.

According to survey data compiled by the UK’s Charities Aid Foundation, more than three in ten adults around the world donated money to a charity in 2020. But the rate of charitable giving varied significantly across countries. Of the 114 countries surveyed, Indonesia occupied the top spot, with a donation rate of 83 percent (Figure 3). South East Asia boasted two other countries in the top ten: Myanmar (#2) and Thailand (#4). The major North Asian countries ranked in the bottom half of the group, including Korea (59th), China (85th) and Japan (107th). 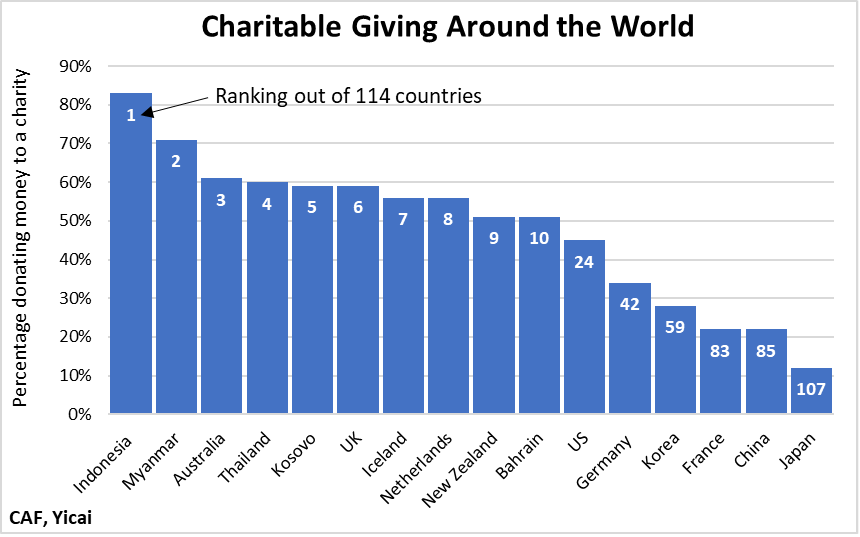 It is reasonable to assume that charitable giving might become more popular in China. Indeed, the Charity Law only came into effect on September 1, 2016. It expanded the scope of eligibility for public fundraising from government-backed public foundations to approved private organizations.

Chinese citizens often display a heart-warming enthusiasm to help the unfortunate, especially when disaster hits. However, people have raised concerns about instances of charitable funds being mismanaged, for example after the earthquake in Wenchuan. Increasing the transparency of charities is an important way to make people feel secure about donating. Non-profit charity watchdogs such as the US’s Charity Watch, Canada’s Charity Intelligence and the UK’s Charity Clarity may be good models for China to follow.

As is the case in many OECD countries, charitable donations are deductible for tax purposes in China, with the donor receiving a credit equal to their marginal tax rate times the donation. To incentivize greater donations, the tax credit could be calculated at the highest marginal rate. This would reduce the cost of donating for all but the wealthiest individuals.

Another way to promote giving is through employer matching of employee donations. In the US, about two-thirds of large companies match their employees’ charitable donations and more than a quarter of small- to mid-size companies do so as well. Matching programs are effective ways of increasing donations. Survey data indicate that 84 percent of donors would be more likely to give if a match is offered, and one in three say they would give a larger gift if matching were applied to their donation.

Chinese people may have a greater incentive to donate to smaller charities, where the results of their gifts can be more readily apparent. As Professor Yao suggests, they may be especially motivated to donate to charities that provide skills to those who otherwise might not be able to obtain them. An excellent example in this regard is Educating Girls of Rural China (EGRC), which was established in 2005 and is a registered charity in Canada as well as Beijing and Shanghai. EGRC empowers young rural women through education and provides opportunities for their personal and career development. Since 2005, it has sponsored 1400 women in their high school and university education. Over 99 percent of them have graduated and all of them have found employment.

Charity’s impact can go well beyond financial support. China’s Leadership wants to encourage the Common Prosperity of people’s spiritual life (促进人民精神生活共同富裕). Research suggests that giving can have a profoundly positive effect on the giver and help to promote cooperation and social connection. It is no wonder that giving is seen as an important part of Christianity (caritas), Islam (zakat), Buddhism (dana – 布施波罗蜜) and Judaism (tzedakah). Seen in this light, the Third Distribution can also help meet the Chinese people’s spiritual and cultural needs.