China’s Productivity Paradox and the Benefits of Bankruptcy 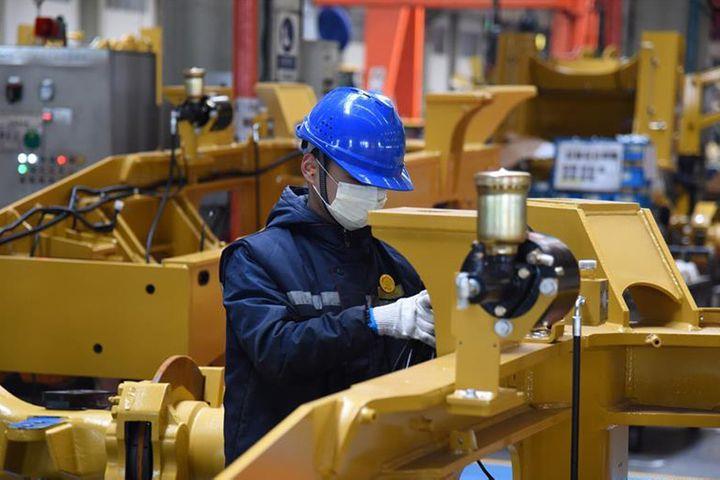 China’s Productivity Paradox and the Benefits of Bankruptcy

(Yicai Global) Sept. 30 -- Cai Fang is one of China’s most respected economists. A former Vice-President of the Chinese Academy of Social Sciences (CASS), he is best known for his work in demographics. In August, Professor Cai delivered a talk on “China’s Productivity Paradox” in which he argued that improving the allocation of resources is the key to making the Chinese economy more efficient.

The title of Professor Cai’s talk is a reference to Nobel prizewinning economist Robert Solow who, in 1987, bemoaned slowing US productivity growth by remarking that “You can see the computer age everywhere but in the productivity statistics.”

In fact, the productivity paradox has become increasingly perplexing since Professor Solow made his famous quip. In the last two decades, computing power has increased exponentially. In 2000, the most powerful supercomputer could make 4.9 trillion floating-point operations per second (FLOPS). Twenty years later, the supercomputers are nearly a hundred thousand times as powerful and capable of making 442,000 trillion FLOPS. Instantaneous access to information has spread around the world and, across the globe, people are connected as never before. The number of internet users increased by more than ten-fold, from 401 million in 2000 to 4.7 billion in January 2021. Most people use mobile devices to access the web and this portability offers unparalleled convenience.

Despite these eye-popping advances in information technology, productivity growth continued to slow in OECD countries. Measured in terms of output per person employed, the annual rate of growth fell from 1.0 percent over 2001-10 to only 0.6 percent over 2011-2020. This slowdown was not limited to a few, leading-edge countries. Most of the 37 countries in Figure 1 lie below the dashed 45-degree line, indicating that their productivity growth in the last decade was slower than over the previous ten years. Ireland is a notable exception. 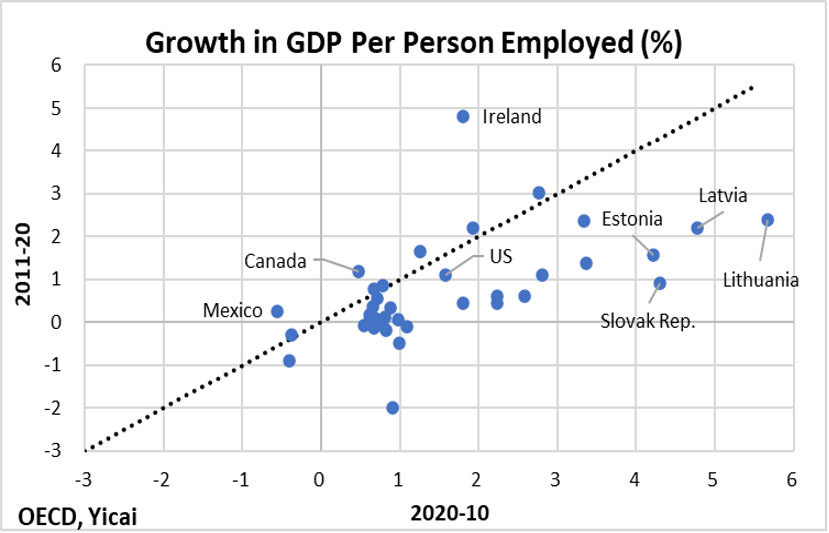 Productivity growth has slowed in China as well but the decline has been somewhat less dramatic than in the rich countries. In China, output per person employed grew by close to 10 percent per year between 1991 and 2010 (Figure 2). Productivity growth slowed to 7 percent in the most recent 10-year period. There was a very sharp decline last year due to Covid-19, but I would expect that we will see a rebound to the 6.0-6.5 percent range in the coming years. 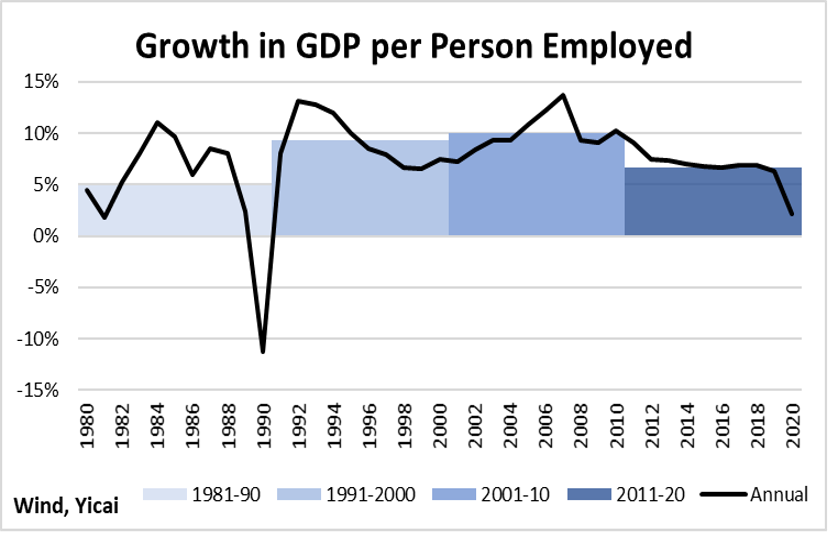 So how do we explain the paradox of slowing productivity growth in the face of rapid advancement in information technology?

Labour in rich countries, counterintuitively, flows from high-productivity to low-productivity sectors. Professor Cai cites empirical work by Daron Acemoglu and co-authors who argue that firms in sectors that use information technology intensively do increase their productivity. However, rather than raise output, these firms shed labour. The displaced workers flow to lower-productivity sectors and productivity falls economy-wide. Professor Cai notes that in both the US and Japan, most of the recent job creation has come in the service sector, which is less productive than manufacturing.

In China, Professor Cai attributes the problem to insufficient “creative destruction”. Within a given sector, inefficient firms should cease production to allow for the expansion of new and more productive ones. Professor Cai points out that in the US, one-third to one-half of the increase in productivity comes from firms’ entry and exit. In China, he says, policy often inhibits creative destruction. Monetary policy has been loose, with the growth rate of M2 greater than that of GDP. This easy money extends a lifeline to inefficient firms. Moreover, canny corporations will find ways to curry favour with the government – even going so far as to reinvent themselves as “strategically important” – to obtain public sector support. The economy is left with too many “zombie firms” while new entrants cannot obtain the capital and labour to expand their operations.

While Professor Cai argues that raising China’s productivity requires more creative destruction, this process needs to be orderly and it depends, to a great degree, on effective bankruptcy procedures. Effective bankruptcy procedures allow for the rapid liquidation of low-productivity firms and a speedier reallocation of their assets and labor. Moreover, effective procedures help preserve the value of the bankrupt firm’s assets. This increases the amount that creditors can expect to recover and should support the investment environment. Both of these channels help underpin productivity growth.

The number of Chinese firms filing for bankruptcy has grown rapidly over time, from 1,521 in 2012 to 10,132 in 2020. However, there were more than twice as many bankruptcy filings in the US last year, suggesting that the procedure is still probably under-used in China.

The Chinese government understands the role that effective bankruptcy can play in promoting economic efficiency. In 2007, it began establishing tribunals that specialized in handling bankruptcy cases. The number of cities with such tribunals expanded gradually over the subsequent decade. Research by Li Bo and Jacopo Ponticelli exploits the phased rollout of these specialized tribunals to study their effect on both judicial outcomes and local economic development. Their results are intriguing.

First, the specialized tribunals were more likely to hire judges that were trained in elite law schools.

Second, the specialized tribunals were able to resolve their cases much more rapidly, compared to the traditional commercial courts. They were particularly effective in resolving the bankruptcies of state-owned firms. This means their judges were better insulated from local officials’ pressure to keep weak companies in business.

Third, the commercial environment improved in the cities that introduced the specialized bankruptcy tribunals, relative to those in which bankruptcies were resolved by the traditional courts. These improvements deepened the process of creative destruction along the lines discussed by Professor Cai. In the cities with specialized tribunals, the creation of new firms was more rapid. The share of labour in “zombie-intensive” industries fell.  And firm productivity increased.

Li and Ponticelli’s research suggests that a greater use of efficient bankruptcy procedures can be part of the solution to China’s productivity paradox. However, as Professor Cai reminds us, promoting economic efficiency has to go hand-in-hand with social protection. Indeed, that is what Common Prosperity is all about.