The US Economy: Three Medium-Term Risks 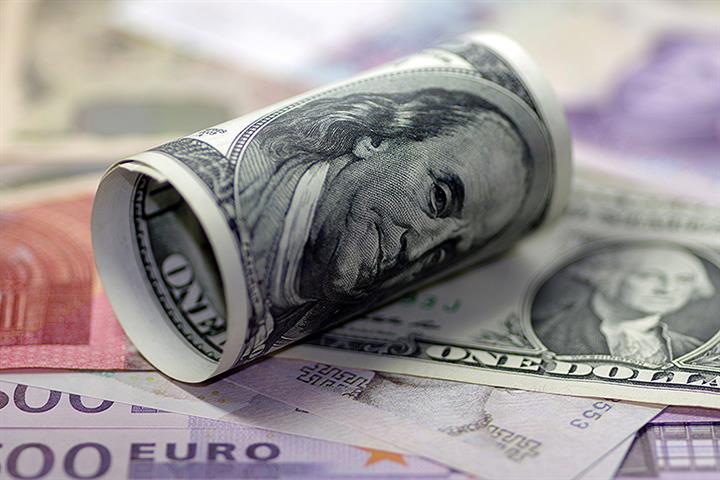 The US Economy: Three Medium-Term Risks

(Yicai Global) Sept. 7 -- Over the next few years, the US economy faces three key risks: (i) productivity growth could stall and living standards could stagnate, (ii) the costs of transitioning to a low-carbon economy may be unbearable and (iii) rising social tensions could continue to feed populism and poor policy choices.

The US’s labour productivity growth has slowed sharply in the last decade. Output per hour worked in the non-farm business sector grew by 2.4 percent, on average, between 1990 and 2010. In the subsequent ten years, growth was only 1.1 percent. You can see the slowing productivity growth in the way the slope of the blue line flattens in Figure 2.  Note that productivity in the manufacturing sector (the orange line) peaked just after the Financial Crisis and actually declined in subsequent years. This implies that all the recent productivity gains have been in the service sector. 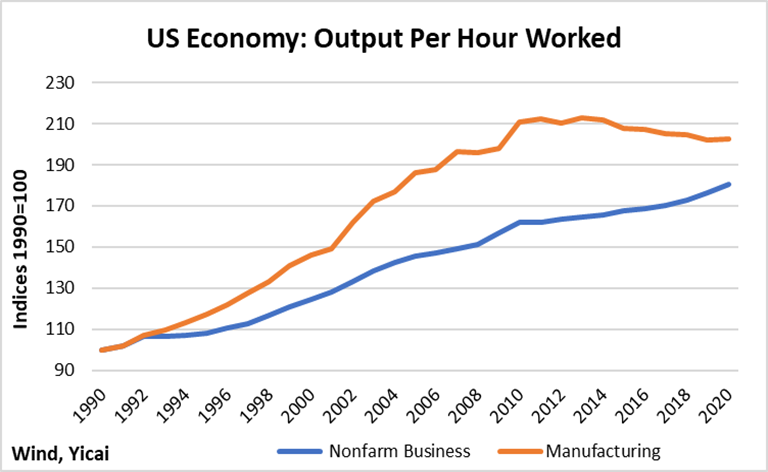 As noted above, the US is close to the productivity frontier. From the perspective of the representative American firm, it is difficult to increase profits by becoming more technically productive and pushing the frontier further out. Rather, it is easier to increase bottom lines by cutting costs and getting more economically competitive.

From this perspective, it is not surprising that US investment rates have fallen since the Financial Crisis. While declining investment rates were a common phenomenon among advanced economies, the drop was the sharpest in the US (Figure 3). The US’s average investment rate in 2010-19 fell slightly below that of the Euro Area and well below those of Japan and Korea. Low investment rates bode poorly for future productivity growth.

Rather than invest in raising productivity, American firms sought to increase their competitiveness by offshoring and outsourcing. Important savings came from reducing healthcare costs. US healthcare costs have risen very rapidly, from 5 percent of GDP in 1960 to close to 18 percent of GDP in 2019. Moreover, unlike European countries and Canada, healthcare in the US is provided privately, often through employer-sponsored insurance plans.  According to Nobel Prize-winning economist Angus Deaton, the average individual and family health insurance policies cost USD10,000 and USD20,000 respectively in 2019. “Those costs are just not tolerable for a firm to pay for a worker who is only worth about USD30,000 or USD20,000 a year,” says Deaton. “That’s one reason why so many companies have shed their jobs that are available to less educated workers. Very few large corporations have their own janitors, food service workers, drivers, security, or call center operators anymore — they contract those jobs out.”

The drive to reduce costs is also evident in the growth of the “gig economy”, where workers are paid for the "gigs" they perform – such as a food delivery or a car journey – instead of receiving a regular wage and benefits. In California, app-based transportation and delivery companies lobbied for the passage of Proposition 22, which allows them to treat their drivers as independent contractors rather than employees. This allows the companies to avoid paying benefits such as time-and-a-half for overtime, sick leave, health care and unemployment insurance.

Medium-term risk #2: Can the US bear the costs of becoming a low-carbon economy?

While American firms have been focused on increasing their economic competitiveness, the push to address global warming has the potential to significantly increase their costs of doing business. The US economy is particularly carbon-intensive. In 2019, per capita carbon emissions were 15 tons, double the amount in the EU. Both the US and the EU have announced emission reduction plans. Even if these plans are fully implemented, Americans will still be outsized emitters. By 2030, per capita emissions in the US would still be higher than those in the EU today and double the EU’s 2030 target (Figure 4). 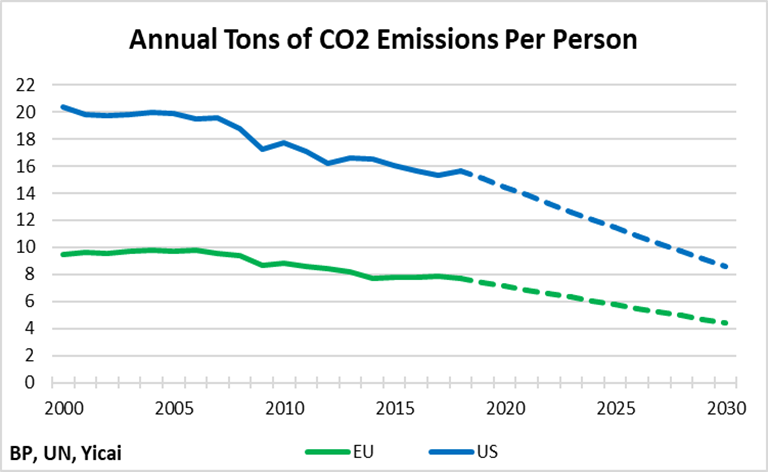 Over the last decade, the US has cut emissions by replacing coal-fired power plants with those that burn natural gas. Still, the low price of its fossil fuels encourages Americans’ high carbon-intensity. A litre of gasoline costs USD1.95 in France and USD1.91 in Germany but only USD0.81 in the US. The US envisages per capita carbon emissions falling by some 40 percent between 2019 and 2030 but it is hard to imagine how this could happen without increasing fossil fuel prices. However, such price increases will reduce the US’s competitive position compared to Europe.

Europe is not waiting for US environmental policy to kick in. The EU recognizes that its more stringent environmental regulations put its firms at a competitive disadvantage. It has designed a Carbon Border Adjustment Mechanism to ensure that goods sold in the European market have paid a common price for the carbon emitted in their production. European importers of iron and steel, cement, fertiliser, aluminium and electricity generation will have to report the carbon content of these goods beginning in 2023. By 2026, they will be taxed if the price they paid for the imbedded carbon was lower than the EU’s.

The move to a low-carbon world will affect all countries. But its impact will be greatest on very carbon-intensive economies like the US’s. The risk is that policies to address global warming will have the effect of eroding the US’s competitiveness.

Despite growing faster than the average OECD country over the last decade, the US has delivered sub-par social results. This is perhaps best seen by looking at the change in male life expectancy between 2009 and 2019 (Figure 5). American males’ life expectancy grew from 76.0 to 76.3 years over the decade, well below the median increase of 2 years for the sample of rich countries shown here.

Not only is US male life expectancy relatively low in comparison with other rich countries, there is a wide dispersion between how long rich and poor American men can expect to live. In a 2016 study, Harvard economist Raj Chetty found that forty-year-old men in the top 1 percent of the American income distribution live 15 years longer than those in the bottom 1 percent. 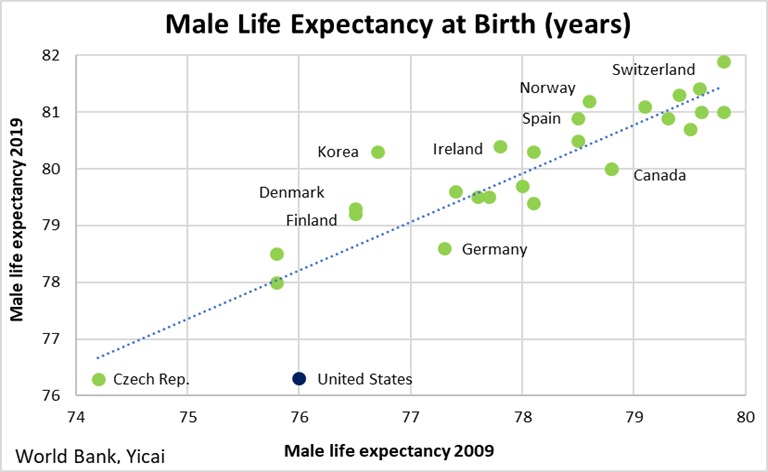 When it comes to protecting the poor, the US is an outlier among rich countries. The OECD estimates that 18 percent of the US population lives in poverty, where poverty is defined as receiving less than 50 percent of the median household disposable income. The average poverty rate among OECD countries is only 11 percent (Figure 6). 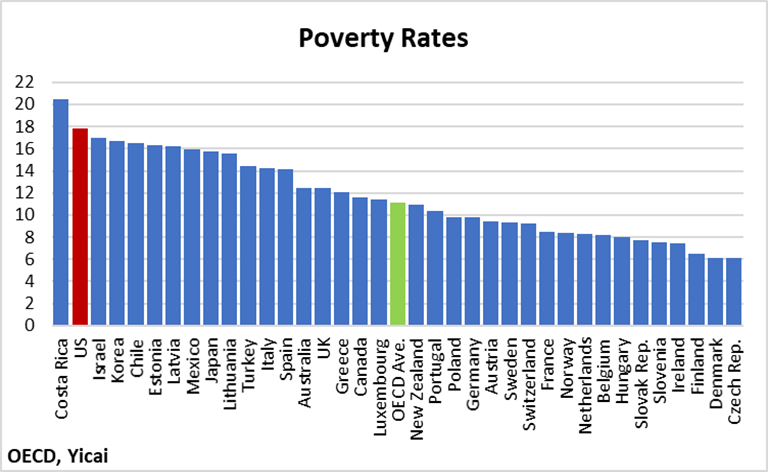 In rich countries, the fallouts from the Financial Crisis and the pandemic and the effects of automation and outsourcing have hit the poor hard. All OECD governments have had to manage these shocks. But the US has an especially thin social safety net that does relatively little to protect the disadvantaged. As a result of its tax and transfer policies, the average OECD country reduces its poverty rate by 16 percentage points (Figure 7). By contrast, policy only reduces poverty by 9 percentage points in the US (from 27 to 18 percent). 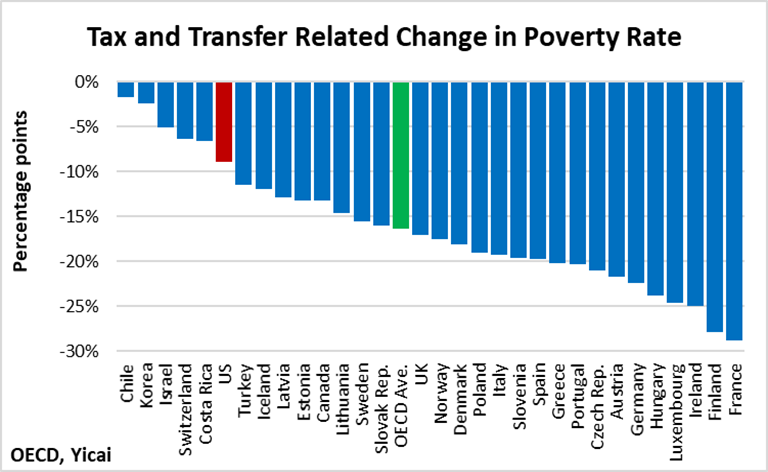 Looking at the US data, Angus Deaton and Anne Case have documented what they call “Deaths of Despair”. They estimate that in 2017, there were 158,000 deaths among non-college-educated whites that were caused by drug overdoses, alcohol poisoning, and suicide. This phenomenon seems to be unique to the US and is the result of policy-passivity in the face of stagnant wages and corporate cost-cutting. It is no surprise then that US workers without a college degree are less likely to be employed than those in other OECD countries (Figure 8). If the US were able to employ at least as many of these workers as the average OECD country, it would represent a sizable increase in potential GDP.

The Deaths of Despair are an extreme phenomenon, but they are an expression of a society that is becoming increasingly polarized. In a polarized society, those left behind believe that the system is not working for them. This feeds populist politics – like the election of Donald Trump in 2016. Populism often leads to policy choices that are detrimental to a country’s longer-run prosperity. A lack of faith in the system results in the sort of low economic participation rates we are seeing in the data. At more extreme levels, it can feed social unrest.

Notwithstanding the competitive nature of current China-US relations, it would be a mistake for China to hope that these three medium-term risks materialize. The US is not only China’s largest export market, it also underpins much of global demand. Moreover, the technologies developed in the US eventually are disseminated to China. Thus, it is in China’s interest that the US remain productive and that it avoids further descent into populism. While the responsibility for the US’s development ultimately lies with Americans, China should actively seek out opportunities for mutually beneficial cooperation.