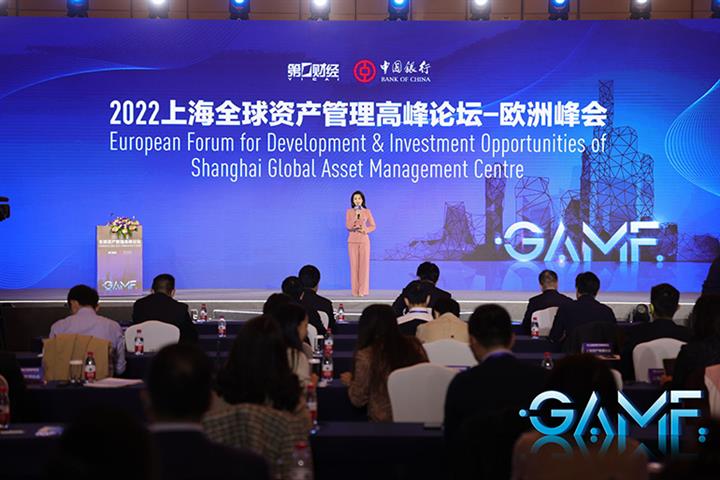 China-EU partnership in the asset management industry has ushered in a new era. In 2022, a stock connect scheme linking Shanghai and London was expanded to include capital markets in Germany and Switzerland, while more and more top European asset managers such as Amundi are blazing new trails in the onshore China market. And as two major stakeholders in global climate action, China and Europe share enough common ground ecologically to forge a closer partnership in green growth.

Against this backdrop, the Shanghai GAMF is holding a special Europe Forum on internationalization, with leading asset management figures in China and Europe discussing the prospects for cooperation between the two financial markets amid the new global capital trend.

“The 20th National Congress of the CPC made it clear that we should continue promoting high-level opening-up, enhance the synergy between domestic and international markets, and improve the quality of trade and investment cooperation,” Guan Xiaojun, deputy director of the Shanghai Municipal Bureau of Finance, said during a speech.

“The long-term sound fundamentals remain intact despite the short-term downward pressure on the domestic economy,”said Huang De, member of the Party Committee of Bank of China’s Shanghai branch. “As China is committed to high-quality opening-up, the capital markets and renminbi assets will have a bigger appeal to global investors.”

Jean-Pierre Raffarin, special representative of the French government for China affairs and former prime minister of France, noted during a keynote speech that the world is experiencing a lot of tensions, and the best way to ease tensions is to develop cooperation.

“We need to develop joint businesses with shared ambitions, but we also have to create investments for projects and businesses,” he said.“Eurazeo, with the agreement of the two presidents, has created an investment dynamic to help European companies to go to China and Chinese companies to go to France. This is done by another fund, which has also been helped by the Silk Road Fund, TRAIL, which has this ambition to help the reciprocal development of companies in China and Europe.”

China had become the world’s largest trading nation in goods by the mid-2010s. The share of trade denominated in Chinese renminbi has increased nearly five times in the last decade, so the importance of the  renminbi, both as a settlement currency for cross-border payments in international trade and as a funding currency for loans and debt securities, has increased.

Dr. Patai Mihály, deputy governor of the National Bank of Hungary, said that “recognizing the significance and growing international role of the renminbi, the Magyar Nemzeti Bank, the central bank of Hungary, announced its Central Bank Renminbi Program in 2015.”

The program was designed to rest on four pillars: investing parts of the central bank forex reserves in renminbi; creating a central bank renminbi liquidity instrument to deal with market disturbances (bilateral swap line agreement); the development of renminbi settlement infrastructure; and financial stability and supervisory issues related to the use of the renminbi and the cross-border activity of Chinese banks. The Hungarian central bank’s Monetary Council also decided to invest in the Chinese bond market in 2015.

As China further liberalizes its bond market, the stock market’s opening-up is also picking up speed. In February 2022, China expanded the Shanghai- London Stock Connect program to include Shenzhen-listed companies, as well as capital markets in Germany and Switzerland.

During the Shanghai GAMF session on “Dialogue With Exchange Houses,” Niels Tomm, representative of the Board Deutsche Börse, said “we are very proud to announce today that we are now technically ready to launch China-Germany stock connect and are happy to welcome A-share companies to issue GDRs in Germany.”

“The pipeline for further GDR listings on SIX looks very promising despite the current macroeconomic challenges and some uncertainties around the development of the pandemic,” said Marco Estermann, head of business development at SIX Swiss Exchange. “I'm confident that we will see several additional GDR listings on SIX over the coming months.”

Jon Edwards, chief representative of the London Stock Exchange Group, said across the five companies from China that have listed GDRs, more than USD6.5 billion has been raised in total. There is also a very strong take-up by European institutional investors.

Dating back to the 7th China-U.K. Economic and Financial Dialogue in 2015, both sides supported the feasibility study on the Shanghai-London Stock Connect scheme. “In February 2022, the CSRC broadened the scheme,” said Harry Fu, managing director of the global business development department at the Shanghai Stock Exchange. “The project has achieved great success.”

He said that a total of five companies listed on the Shanghai Stock Exchange have issued GDRs in the United Kingdom so far and three have issued GDRs in Switzerland, with a total financing amount of more than USD7.1 billion. Five businesses listed on the Shenzhen Stock Exchange have raised about USD1.9 billion on the SIX Swiss Exchange. The companies cover a wide range of industries, including new energy, new materials, high-end manufacturing, healthcare, electricity, finance, and insurance.

The first is “large market scale,” which has been attracting more and more international investors as China further liberalizes; the second is “immense opportunities,” as the second-largest stock and bond market China has a bigger appeal to international financial institutions. Moreover, valuations in China's A-share market remain at historic lows. The third term is “rosy prospects.” In the first three quarters of 2022, about 80 percent of the 4,800 companies listed in Shanghai and Shenzhen had total operating revenue of CNY52 trillion, up 8.5 percent from a year earlier.

For example, he said the introduction of a derivatives “Swap Connect” will be conducive to the mutual recognition of domestic and foreign central counterparties (CCPS). By allowing more overseas institutions to directly enter the domestic interbank foreign exchange market as international members, they will be able to leverage exchange rate and interest rate derivatives to better hedge risks. Furthermore, improving the application of high-grade bonds as collateral will increase overseas interests in renminbi asset allocation.

Green cooperation between China and Europe is also gaining steam. China has vowed to transition to a low-carbon economy with enhanced climate resilience.

In the Shanghai GAMF’s dialogue on “Enabling Green Transformation With Europe & China ESG Financial Ecological Cooperation,” Arnaud Delestienne, director of international capital markets at the Luxembourg Stock Exchange (LuxSE), said more capital is being invested in sustainable investments in China and around the world. He also noted that Bank of China successfully issued green bonds on the LGX last year.

Asset owners and other capital-market participants have a critical, catalytic role to play in transforming the economy from brown to green by channeling capital toward less emissions-intensive investments and green solutions, said Thomas Richter, chief executive officer of German Investment Funds Association-BVI. “As the intermediary of capital demand and supply, we are glad to take over the responsibility to do the selection on an EGS basis,” he said. “The role of BVI is to cooperate with policymakers and lawmakers to enhance the framework for EGS investments.”

As China’s most globalized and integrated bank, Bank of China has institutions across the Chinese mainland as well as 62 countries and regions, with branch offices in 15 European Union countries. The bank set up its Geneva branch in 2021, providing full coverage to major financial centers in Europe. By hosting the Europe Forum, Bank of China aims to introduce the investment opportunities of Shanghai as a global asset management hub to its European partners, pool industry wisdom to move China-EU financial cooperation to a higher level, and contribute more to the high-level opening- up of China's financial sector.