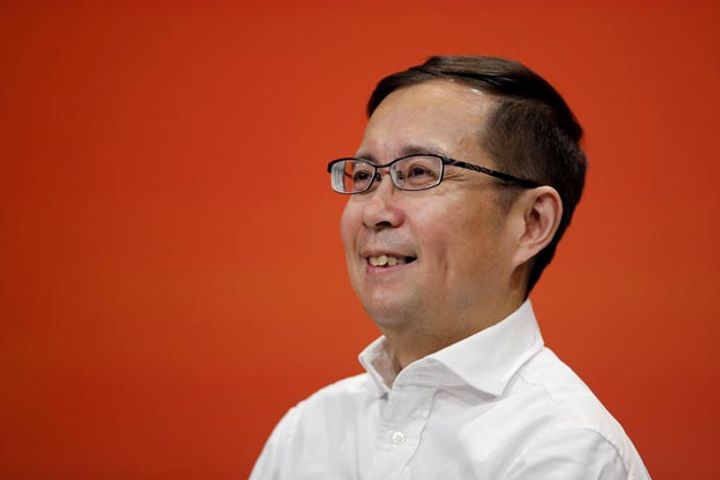 A Talk With Alibaba's Daniel Zhang, the Next Jack Ma

(Yicai Global) Sept. 10 -- After Jack Ma's announcement today that he will step down as executive chairman of e-commerce titan Alibaba Group Holding, all eyes are turning to his replacement -- Daniel Zhang, -- but just who is the man who may become China's next best-known corporate executive?

In the open letter announcing his retirement, Ma spoke highly of Zhang, who is known as Zhang Yong in Chinese and is a mature 46 to Ma's paradoxically youthful 54. The future leader took the reins as chief executive three years ago and has bolstered Alibaba's long-term development prospects with remarkable talent, steadfast leadership and supercomputer-like logic and thinking, Ma said. Zhang has proved himself with healthy, sustained growth over 13 straight quarters since taking the torch, he added.

Under Zhang's watch, Alibaba has gone beyond an e-commerce company and is a digital economy giant driven by big data, serving hundreds of millions of consumers and tens of millions of small- to medium-sized enterprises with services covering e-commerce, finance, logistics, cloud computing and entertainment, Ma continued.

When asked by Yicai Global about how Alibaba's stock price may shift as Ma steps down, Zhang assured that he was not stressing over it. "We are not running a business based on the stock price," he said. "To help people understand you, you need to do the right thing first and then get the results."

Zhang joined Alibaba in 2007 after leaving his post as chief financial officer at gaming company Shengda Interactive Entertainment, and is now known internally as "the one who changed the engine on the highway." As a new recruit, Zhang was invited to West Lake in Alibaba's hometown Hangzhou and was asked by Ma why he wanted to work with the company, which has made Jack Ma one of China's richest and most famous businessmen.

He responded by saying he had been CFO of a company turning over CNY3 billion (USD437 million), and now wanted to do the same for a firm bringing in CNY30 billion. Little did he know his role would far surpass that of a CFO, and that the company he worked for would soon be turning over hundreds of billions of yuan each year.

When asked about how he laid out his career plans, Zhang said that plans are not the reason behind his success.

"I'm so lucky to be Alibaba's CEO," he said. I never expected it, I'm very thankful to be in this position."

Ma is very active and spends a lot of time out and about -- he has apparently already spent more than 800 hours on planes this year, Zhang said. But Zhang is much less outgoing, and despite having lived in Hangzhou for 10 years, he barely knows the city beyond the walls of the Alibaba campus there.

Ma spends just a few days a month in Hangzhou, so the pair make plans to meet up whenever he is in town. The pair will sit and chat for hours, not necessarily about just business, but thinking too, Zhang said.

The current chairman's boldness brings great value to Alibaba, he continued, saying that by taking a break from the day-to-day, he can look over the bigger picture. Being 'Master Ma' is a bit like being an alien overlooking the earth, Zhang added.

"We need to do our best today, that's for sure," he said. "We already have many opportunities and good plans. But the important point is figuring out how the world and the internet will change in the next five or 10 years, or even further into the future."

The pair do have their disagreements, but they are not as aggressive as some may think. Zhang is not a hot-tempered person and Ma has asked before how he manages to keep his cool so well. Zhang likes to listen to opinions first before deciding on his stance, and likes to let time provide the evidence for an argument.

Zhang feels he has become more adventurous in recent years, and thinks he needs to be "skilled at making imperfect decisions." He also admires Ma's public speaking skills. He tried himself to learn to speak well in public but struggled to do well, and with the belief that some people are just born to do certain things, he decided to focus on doing things he does well.

On May 7, 2015, Ma published an open letter titled This Is the Age of Young People, in which he said that the then recently listed company would replace its leadership team with executives all born after 1970.

Two months later, it released its first annual report after its record-breaking 2014 listing, unveiling plans to step into the services sector as a fourth indispensible pillar behind water, electricity and land. Fast forward two years, and the company had transformed to become so much more than just an e-commerce firm.

"We've made great strides in the past two years," Zhang said. "We have completely transformed from a well-known e-commerce company into a big-data driven e-commerce, finance, logistics, cloud computing and entertainment hub, generating and using data to feed back into the company."

It has also spawned a heap of subsidiaries big enough to spin off into their own companies. Fintech affiliate Ant Financial is already planning its own initial public offering, and Alibaba's logistics network Cainiao handles 50 million packages every day.

"The impact of cloud computing on society has only just begun," Zhang said, adding that Alibaba's cloud business has repeatedly grown by triple figures over the past few years. Generating new business areas has laid the foundations for future development over the next five or ten years, or even longer, he continued.

The firm also purchased Beijing-based video-streaming platform Youku in 2016, building a culture and entertainment hub with its UC Browser and video production unit, and making moves into overseas markets.

This is what the outside world sees, but cogs are whirring internally too, according to Zhang.

"Over the past year, Alibaba has made technical adjustments internally, such as appointing people in charge of internet data centers and computing platforms," Zhang said. "It also set up research and development laboratories for voice technology and processing, semantics and translation," he added.

"These labs are mostly for research so won't bring about results immediately," he said. They look at technologies over the long term, seeing what will emerge over the next decade or so rather than trying to win hearts tomorrow.

"Within the firm is an ecology of all business sectors," Zhang added "It has a rising tide, or peak period, then a regression, when the firm conserves strength, stores up energy and re-integrates, restarting the business with a new generation of technology and ideas. It needs to be a full cycle, only in this way, in my opinion, is the firm an evergreen one."

This mode of thinking reflects Ma's plans for Alibaba's advancement, which plans to have each business sector lead the company in turn. Current plans put Ant Financial as the lead unit from 2017 through 2019, then Alibaba Cloud will be top dog until 2021, before Cainiao paves the way through 2024.

According to current growth forecasts, Alibaba's gross merchandise volume would rank it as the world's fifth-largest 'economy' by 2036, behind the United States, China, the European Union and Japan. The GMV does not refer to the amount of money made by Alibaba, but the value (ignoring discounts) of the goods that merchants using its online marketplaces sell.

In Zhang's eyes, there are two keys to keep building that economy: market drivers and consumers. The Alibaba economy is a restructured value chain on which different participants exist and realize their own commercial value through division of labor and cooperation, he said.

Zhang believes that the emergence of the cloud sector is a huge opportunity for the firm, and will allow Alibaba to better understand the needs of its business customers.

"The entire economy structure will be very interesting with a 2C (to-customer) line and a 2B (to-business) line, between which respective ecosystems will take form. The so-called ecosystem refers to different departments' division of labor and cooperation, in which the market talks and nobody can force you to cooperate with anyone through executive order. It evolves itself in the market," he said.

In the Alibaba economy, big data is naturally accumulating during operations, and then processed and fed back into the value chain for use by the company or its partners, said Zhang. "We regard e-commerce, finance, logistics, cloud and entertainment as the business areas in which data is generated in their respective value chains," he added. "They generate and consume data in a cycle. This is the essence of the economy, it is alive and not controlled by the will of man."

At the heart of that economy will be customer value, Zhang said, adding that this will never change.

"Alibaba aims to reshape industries using internet ideas and technology," he added. "We do the same thing in different fields, by digitizing industries and their supply chains."

When not at work, Zhang enjoys watching sports -- mainly American basketball and British football -- and believes you need hobbies, but does connect his viewing with his career.

"I'm basically a coach leading a team, managing the positions of the 11 players," he said, though his team has far more members than a soccer team.

One of Zhang's main aims is to abolish the idea of distinguishing colleagues as freshmen or veterans, and looks for his workers to be kind and have trust in others.

He has also been pushing for cultural diversity for several years, he said. Zhang wants to recruit people from different educational backgrounds, with varying experiences and unique qualities.

"I don't like the word 'hire,'" he said. "I prefer to say 'find' -- my way of looking for talent is simple, I just invite them to drink tea with me. Candidates are generally between 35 and 45 years old with great potential or suitable traits.

He believes that Alibaba's successful transformation of the internet industry has depended on its original batch of colleagues -- those who knew nothing of e-commerce. They are the internet generation of product managers, he said, even though they did not grow up on like computers like their younger colleagues.