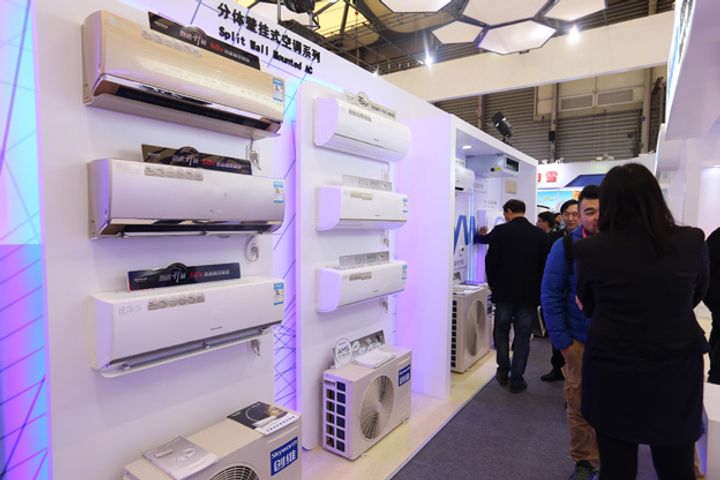 AC Installers Fly to the Rescue as Northeast China Sizzles

(Yicai Global) Aug. 6 -- The northern area of China has sweltered in abnormally sultry weather this summer, and air conditioner sales have gone through the roof in tandem with temperatures, with a serious shortage of installers emerging as a result. Nationwide chains have deployed AC installers to the region by air from other areas to pick up the slack.

Each service team, which travels in by air, enjoys a special service car, per a Suning source, Beijing Youth Daily reported today.

Beijing-headquartered GOME Retail Holdings' recent sales of air conditioners in Northeast China rose 17 times per year, with those in Shenyang, the capital of Liaoning province, up 35-fold from last year. The explosive growth in sales has also exacerbated the shortage of after-sale installers.

The company has been urgently sending AC installation technicians engineers from other areas to the three provinces, thus far dispatching over 200, with the total number of installers sent there reportedly set to reach 500. With two engineers in a team, over 200 supporting teams will thus serve the region.

Installing air conditioners in Northeast China is harder than in other regions, said Ji Qingpei, an engineer with Suning's after-sales division. "Since buildings here commonly have thicker walls, boring holes is very hard, so the number of air conditioners installed here each day is lower than in Beijing."

The platform pays each technician CNY200 (USD29.4) for each unit, and covers all their tools, transport and accommodation costs. An engineer earns around CNY1,500 (USD220) per day.

Its temperate summer weather once made China's northeast a popular cooling-off destination for many Chinese. Climate change may well permanently redirect their migration to points farther north, however.