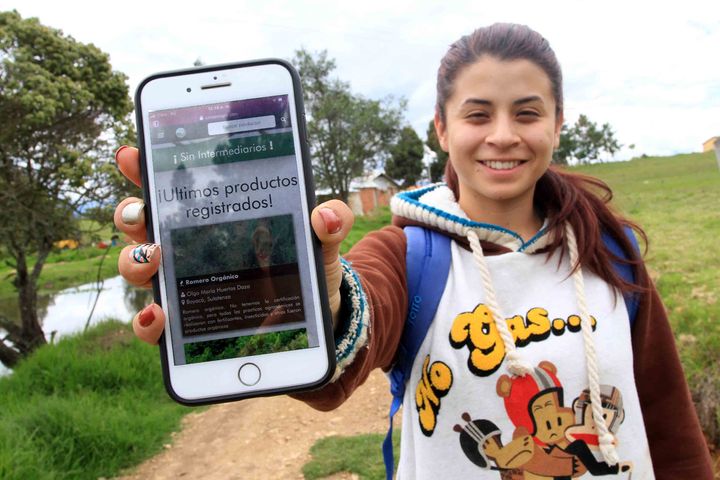 Comproagro is an app that connects Colombian farmers with consumers, allowing them to sell their produce without intermediaries. It has more than 26,000 users in 29 departments in the country and its creator hopes it will develop offshoots around the world.

(Yicai Global) June 24 -- "Mr. Oscar, good afternoon. We saw your products online and we are interested in buying some."

This was the first call received two years ago by Oscar Garzón, a Colombian farmer, from a client who saw his products on the Comproagro website.

"Since I started selling my lettuce online, I have received a lot of calls," says Garzón, who produces vegetables and potatoes, and has doubled his profits by selling directly to consumers. "I'm very happy because being able to negotiate directly with the client allows me to sell at a fair price."

Created by Ginna Jiménez in 2015, Comproagro is an online platform that allows Colombian farmers to offer their produce directly to consumers, enabling them to negotiate not only the price but alsothe payment and delivery methods.

Jiménez, who comes from a family of farmers herself, was only 15 years old when she launched the website. She was inspired when officials from the Colombian Ministry of Information Technology and Communications visited her school and discussed supporting innovative business projects with digital tools.

Later that day, she returned to her farm in the municipality of Toca, in the Colombian department of Boyacá, and told her brother and mother about her idea. "Let's develop an app in which all the peasants in the country can sell without intermediaries, and finally get fair pay for their efforts," she told them.

Farmers say that the problem with middlemen is that they buy products at a fraction of the market price."Intermediaries pay us 500 pesos [USD 0,15] for an avocado. Since we have no other option, we sell the product. Then they go and sell it for 2,000 pesos, which means that they make three times more than we do, when we are the ones who broke our backs growing that avocado," says Jhonatan Lozano, a blackberry producer who lives in southern Colombia.

Lozano also appreciates the app. He has received about 10 calls so far, and most times he has managed to sell all of his products at once, and at nearly twice the price he generally receives.

The platform does not generate profits for its creator. "Right from the start, the idea was to offer a free service," says Jiménez. "It would be unfair for farmers to pay for it, when they already invest a lot to grow their crops."

In 2016, the Colombian Public Ministry (Fenalper, or Federación Nacional de Personerías) recognized Comproagro as a social peace initiative, in the category of entrepreneurship and employment creation. At the time, the platform had around 150 registered farmers. Now it has more than 26,000 users in 29 departments across the country.

"At first we promoted the app by word of mouth. My mother, brother and I worked hard and managed to convince the media to talk about us, so more and more farmers started coming," says Jiménez.

One of these was a beekeeper, Alexánder Martínez, whose experience with the app has been different from the others. Through the platform, he sells his honey for less than its usual price. "But this is not necessarily negative," he says. "I sell some jars to my regular clients, but when they call me from Comproagro I can sell all my production at once. I make a good, very quick profit with it."

Two other farmers, José Martínez and Carlos Muñoz, believe that the Comproagro platform could be better adapted to their needs. Both farmers have been contacted several times since putting their products on the platform, but neither has been able to sell, because clients always call outside of harvest time. "I would like to be able to update the state of my crops in real time so that consumers know when they are ready," says Martínez.

Jiménez is aware that Comproagro is not perfect. "A software engineer joined the team to improve the platform, but we don't have many resources. The idea is to add a chat so that farmers can constantly update the state of the product," explains the young woman, who is now 20 years old.

Her dream is for the platform to become a sort of eBay for farmers, and to remain free of charge. To make a living, she and her family also sell their crops through the app.

In addition to helping farmers, Comproagrohas created more than 30 direct jobs, thanks to its distribution center in Toca, where single mothers peel and clean the products.

Jiménez is now majoring in international business administration at the Boyacá University, while her brother Brayan, a civil engineering student, and her mother, Rosalba, manage the business.

"I want the platform to cross borders, soour farmers can export their products, and farmers in other countries can use our app," she says.