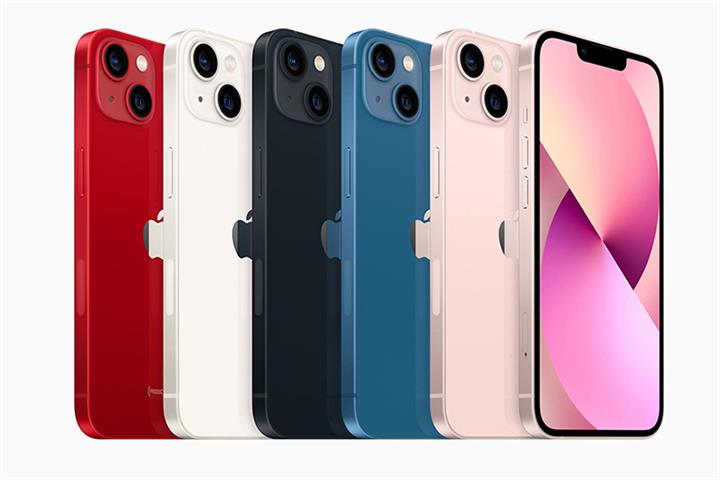 (Yicai Global) Jan. 28 -- US tech giant Apple regained its crown as the best-selling mobile phone brand in China in the fourth quarter last year after a hiatus of six years thanks to its best-selling iPhone 13 series.

Apple claimed a 23 percent share of the China market in the three months ended Dec. 31, its most ever, Singaporean market research company Counterpoint Research reported yesterday. It was closely followed by Chinese mobile phone makers Vivo Communication Technology and Oppo Mobile Telecommunications Corp. with a 19 percent and 17 percent slice of the market respectively.

Apple’s outstanding performance was driven by its pricing strategy and by becoming the choice of high-end users after the fall of Chinese telecoms giant Huawei Technologies, said Zhang Mengmeng, a research analyst at Counterpoint.

The price of the iPhone 13, which debuted in September last year, was up to CNY800 (USD125) cheaper than similar products in the iPhone 12 series. But the California-based phonemaker marked up phones at the higher end of the range, charging an extra CNY900 for the 1 TB versions of the iPhone 13 Pro/Pro Max.

However, overall smartphone sales fell 9 percent from a year earlier in the fourth quarter, dropping for the third straight quarter, according to Counterpoint. And, over the whole year, mobile phone sales slid 2 percent year on year in the fourth straight year of declines.

The average price of a smartphone is likely to rise further in China, as leading handset makers raise their prices in response to dwindling sales, it added.

For the year 2021, Dongguan, southern Guangdong province-based Vivo ranked first with a market share of 22 percent, followed by Oppo with 21 percent and Apple with 16 percent, according to Counterpoint.