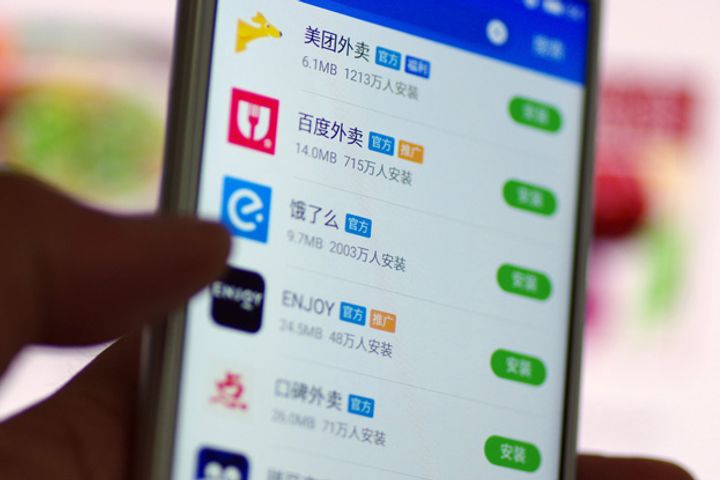 (Yicai Global) March 19 -- One of China's information technology news outlets has carried out a three-month study into the country's leading takeout apps after some users suggested that they may snoop on users through their mobile phones' microphones to provide better recommendations.

Guangdong-based IT Times found no concrete evidence that the apps such as Alibaba's Ele.me or Meituan Waimai listen in on users through their microphones. However, it appeared that their conversations could have influenced the recommendations of restaurants on the platforms in 60 percent to 70 percent of the tests.

IT Times conducted many rounds simulating usage scenarios on Ele.me and Meituan Waimai for Android and iOS between November and March, according to the report released yesterday. During one test on Nov. 19, two reporters opened Ele.me and Meituan and checked the first three pages of takeaway restaurants before locking the phone and leaving both apps running in the background. They then talked about having Japanese food for lunch, which was selected to ensure the fairness of the test as neither participant had ever ordered or searched for Japanese food before.

The two reporters resumed their discussion about Japanese food after locking the screen and six minutes later opened the app again to find that the cafe had reappeared, albeit this time further down in seventh.

They ran multiple tests within one hour and similar situations occurred around 80 percent of the time on Ele.me, though it did not happen on Meituan Waimai.

A subsequent test of Meituan's platform found that it would recommend eateries based on users' mobile browser search records.

The overall test results show that the probability of accurate and similar recommendations cropped up over 70 percent of the time. The report found that Ele.me became less likely to recommend similar results to user's topic of conversation after Jan. 1, while for Meituan, the results based on search results appeared to increase after this date.

Meituan and Ele.me have denied monitoring users though both apps require access to a handset's microphone when installed.

Shanghai-based Ele.me said it had neither developed such product settings nor possessed the related technical capabilities. The company strictly protects user privacy, collects any necessary information with prior users' consent and uses it within the scope of legal compliance, it added.

Meituan stated that it only accesses a user's microphone when he or she initiates the voice input function, which also requires direct authorization. Meituan only makes certain recommendations when a user expresses an explicit request, the Beijing-based firm said.

Collecting users' information via microphones is technically possible while it doesn't mean the apps have performed such actions, experts said.

Though microphone tapping remains difficult to prove, such a coincidence indicates that apps are very likely to have used big data collected on other platforms, said Yang Qibo, a security expert at Tencent Holdings' mobile guard application WeSecure. For example, it will predict your potential needs based on your current location, frequent restaurant visits, previous search habits, and other data, he said.

Apps may recommend restaurants based on the time of the day, or a user's region, age, along with other rough data, according to the head of another data firm. Some applications, however, do use microphones to obtain voice messages on food orders, restaurants among other details, he added.