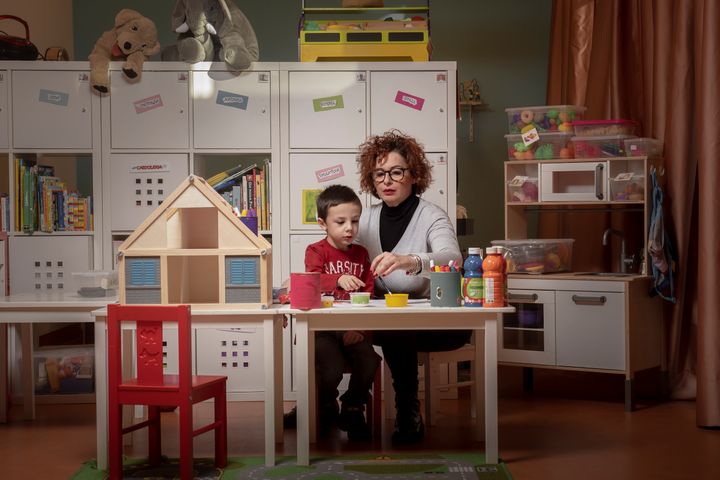 (Yicai Global) June 25 -- Autistic children can be overwhelming. They suffer because they want to communicate – but nobody understands them.

Shouts and crises were common when Gioele Merloni wanted to eat only chocolate and Chicken McNuggets from the box.

"He would throw up everything else," says his mother, Maria Giulia Merloni. "It went on for a year. Dining out was impossible because he would start to scream. He wouldn't socialize or talk – he would just point to objects and scream."

The turning point came when Gioele was included in a national pilot project for children on the autism spectrum to receive intensive early therapy from the Arcobaleno group in Sorengo's OTAF (Ticino Charity for the Assistance of Childhood), in Switzerland.

Games and exercises are designed to break down "wrong" behavioral patterns that haven't yet planted their roots and to build new ones that will help these children communicate with the world.

"The lower the house, the fewer bricks there are, the easier it is to knock it down and rebuild a more secure one," says Veronica Mantagazza, Arcobaleno group team leader, while a four-year-old child on the spectrum plays a card game with an educator in the same room. He's learning that every object on the cards has a name, and receives praises when he matches two of the same together.

Gioele, five years old, patiently went through this phase as well. Month after month, he learned to talk, to build relationships with the outside world and to play with other kids. "This was unthinkable three years ago," his mother says. Two years of intensive therapy changed his life.

"I'm much more optimistic now," she says. "I think that he's going to be able to work and have an independent life when he grows up. Without the early therapy, this would have been impossible. I went through countless sleepless nights because I couldn't bear the thought."

Ten years ago, these children would have been treated for different conditions, while attending special schools.

The tide turned as the benefits of intensive treatment before the age of three started gaining recognition. Early treatment allows autistic children to attend "regular" schools and to better integrate into society as adults.

Two years of therapy can cost up to 150,000 Swiss francs (USD 148,000). For now, the Federal Office for Social Insurance (UFAS) foots most of the bills of five pilot projects taking place throughout Switzerland.

The idea is to invest now to save later — treating an autistic adult during a 50-year period could cost up to 15 million Swiss francs. UFAS is trying to evaluate if early treatment can enhance long-term independence by improving school results and job market opportunities.

For now, the results of these pilot projects are encouraging. "It's a very positive experience; just think that two-thirds of autistic children who received intensive early treatment are now able to attend school regularly with help from special needs teachers," says Professor Gian Paolo Ramelli, head of the Pediatric Neurology department at the Bellinzona Canton Hospital. "Ten years ago, only 20 percent were able to do as much."

Since 2009, pediatricians have been implementing a new screening system in Ticino. "They have a questionnaire for when they observe suspicious behavior," Ramelli explains. "If the suspicions are confirmed, further exams are conducted to quickly determine a diagnosis. We need to intervene before age three."

Behavioral stimulation can reorganize cerebral structure, he explains, but action must be taken before behavioral patterns become automatic.

Mantegazza says the challenge is "to intervene before the child adopts non-adequate behavior, teaching him how to communicate and entertain himself. It's about reducing problematic behavior through pedagogical and therapeutic programs that involve speech and occupational therapy, evolving teaching methods, applied behavioral analysis, parent training, and so on."

From 9 am to 3:30 pm, five educators rotate looking after nine children aged two to four years old, for a minimum of two days a week.

"We work with the Applied Behavior Analysis (ABA) method, which is a set of techniques based on the scientific principles of learning and action as a basis for our approach to autism," Mantegazza explains. "Each child has a personalized program."

One child is trying to solve a puzzle to learn to amuse himself and avoid repetitive movements. "Here, we help children acquire skills that they will practice later and apply to different circumstances," says the specialist who will follow him once he finishes the program and starts school.

Some of the older children already attend kindergarten a few mornings a week, alongside integration specialists who collaborate regularly with Arcobaleno group educators.