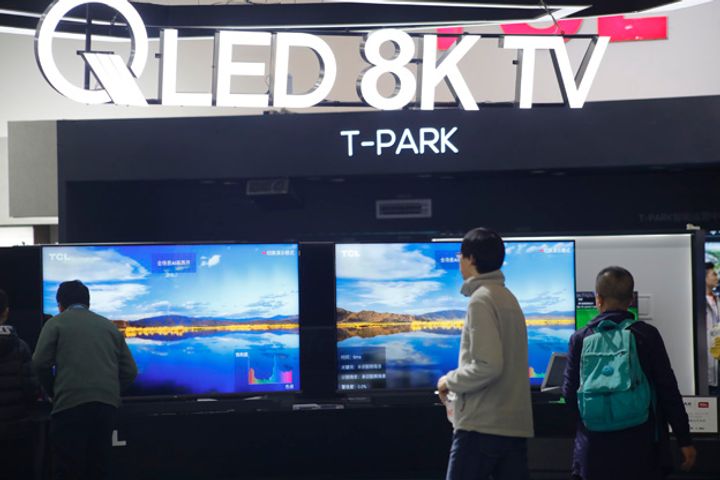 (Yicai Global) March 19 -- China's home appliance makers have embarked on an era of optimizing market share rather than expansion, with more opportunities accruing in structured market segments. This was the consensus opinion that Yicai Global picked up on at the annual Appliance and Electronics World Expo that ended two days ago.

Precisely serving various market segments is also one of the reasons why the Tokyo-based multinational's TV business achieved growth despite a softening market, Takahashi said, adding that the company does not blindly pursue sales figures but specifically targets certain user groups. The firm will further divide the segments this year, with a focus on movie, sports, video game fans and other users. Sony debuted many new units of its liquid crystal TV displays with 8k resolution and organic light-emitting diode TVs with 4k resolution at this year's AWE.

The economic cycle is short term but rising domestic consumption is an inevitable and long-term tendency, Xie Biao, Sony China's president of consumer sales and marketing, told Yicai Global. So the firm will continue to pay attention to the high-end, large-screen TV market, and the strategy is unlikely to change, he added.

Sony's sales of OLED TVs in China more than doubled last year, a faster pace than the average growth rate of 34 percent among peers.

TVs with 8k resolution will see growth for the first time this year, he said, adding that some 20,000 units are expected to sell, climbing to 60, 000 next year.

While Sony continues to pursue the high-end TV segment, Chinese electrical appliances maker Midea Group is trying to grab business from all segments through a number of sub-branded products. The structured segments still have a chance to grow, Qu Xiangming, the Foshan-based group's chief marketing officer and branding director, told Yicai Global.

"Different target consumers have diversified and personalized demands for home appliances, meaning customization," he said. "On the other hand, intelligence is turning the linkage between various devices into reality, and Midea intends to realize the product chain for its customers."

The joint venture established by Midea and Swedish manufacturer Electrolux is now promoting Germany's AEG brand in China, AEG's Chief Technology Officer Klaus Warmedinger said, adding that he was optimistic about the future opportunities for Chinese high-end devices and sets.

The JV has already debuted its refrigerators, dishwashers, kitchen extractor fans, kitchen ranges, ovens and other kitchen electric appliances in sets or series, and plans to open stores in Shenzhen, Guangzhou, Beijing and other cities in China.

With layered user circles, consumer-to-manufacturer reverse customization is becoming a new trend in the home appliance sector to meet demand.

Today's consumers have changed a lot, they are no longer at a uniform level, but are divided into many circles and levels, Yan Xiaobing, senior vice president of JD.Com, said in a speech at the session of the home appliance summit at this year's AWE.

Yan, who also heads JD's retail computer division, communications and consumer electronics, revealed that the e-commerce firm has set up a series of quite complete information systems to locate certain users within a circle or a level. "Reverse customization will become a trend in the home appliance industry in the next few years," he forecast.

"JD will shift its focus from targeting goods to zeroing in on clients this year," Yan said, adding that people born in the 1980s and 1990s will gradually become the backbone of consumption, and whose consumption behavior will be quite different from those of the current main consumer forces.

The internet has further changed the retail scenario and sales can now be conducted on e-commerce websites, through physical stores, as well as via mobile apps, mini programs, social networks, smart watches and even virtual appliances. So the key is seizing users.

JD.Com and Midea inked a strategic partnership at this year's AWE. Under their agreement, all affiliated home appliance series under Midea will take part in JD's customization event this year, and this will not only promote the sales of Midea products on JD.Com, but also further boost JD's consumer-to-manufacturer customization service for home appliances.