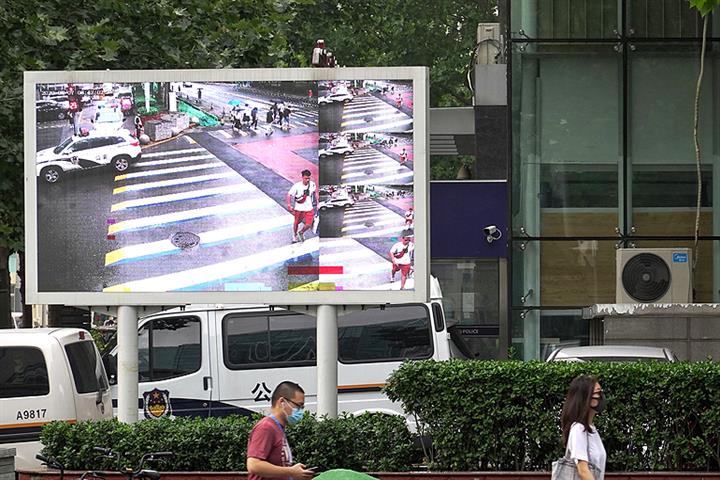 (Yicai Global) Sept. 11 -- A Beijing district that hosts many high-tech companies is testing out a new system to alleviate the traffic congestion caused by pedestrians who cross streets when the lights are against them.

Zhongguancun West launched a trial operation of the smart road crossing system yesterday at an intersection near Microsoft China’s headquarters, Beijing Daily reported today. It is the capital city’s first such system.

The traffic signal on the south side of the intersection shifts between red and green and gives voice prompts to wait or cross. If a miscreant runs across when the light is red, they get a verbal warning and their face is displayed on nearby screens.

“In the past, we installed traffic cameras that were single point, which could only take a partial picture and could not control the overall situation of the entire area,” said Liu Tao, delivery director of China Transinfo, which is responsible for the project’s technical support.

This time, seven sets of high-point cameras have been installed on five high-rise buildings in the district, which has overall control over traffic conditions in the entire area, he said.

The system’s setup, including an intelligent traffic command center as well as transport infrastructure and technology projects, started in April last year.

“A unified intelligent traffic command center has been built for the whole district,” said Zhao Han, director of Haidian’s urban management committee. “If you want to replicate the system in any area, you only need to install front-end collection equipment, and the data can be directly connected to the command center.

“After the entire district is covered, Haidian district’s traffic brain will be completed,” he added.

Preliminary planning and design of the smart transportation project near the Zhongguancun Science and Technology Park in the north of Haidian district has started. Xiangshan district has also been included in the recent plan.