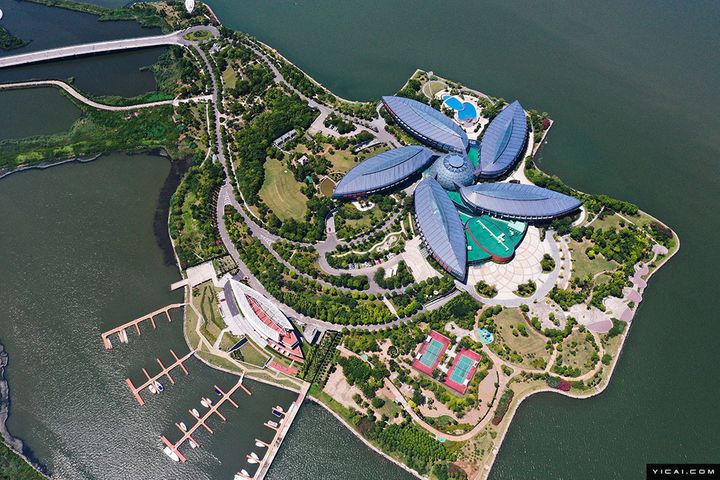 (Yicai Global) Aug. 8 -- China's cabinet the State Council recently issued its 'China (Shanghai) Free-Trade Pilot Zone Lingang New Area Master Plan,' which plots the scale of the new urban area, which lies in a suburban district over 70 kilometers from downtown Shanghai and covers 120 square kilometers, and whose focus of development will be integrated circuits, artificial intelligence, bio-medicines, civil aviation and other fields.

The region's gross domestic product is expected to exceed CNY1 trillion by 2035.

The full expanse of Shanghai Lingang's Dishui Lake is visible in this view from above.

This image captures in their entirety the linear dimensions of Tesla's gigantic Gigafactory, which is under construction in Lingang.

A multitude of new energy vehicles appears in this peek from the sky over Lingang.

China State Shipbuilding's offshore work platform under construction juts up in the distance in this photo as Shanghai Electric-made wind turbine plates neatly stacked in the foreground offer a pleasingly curvy horizontal contrast to all the angular verticality behind them.

This is a view towards the transoceanic East China Sea Bridge.