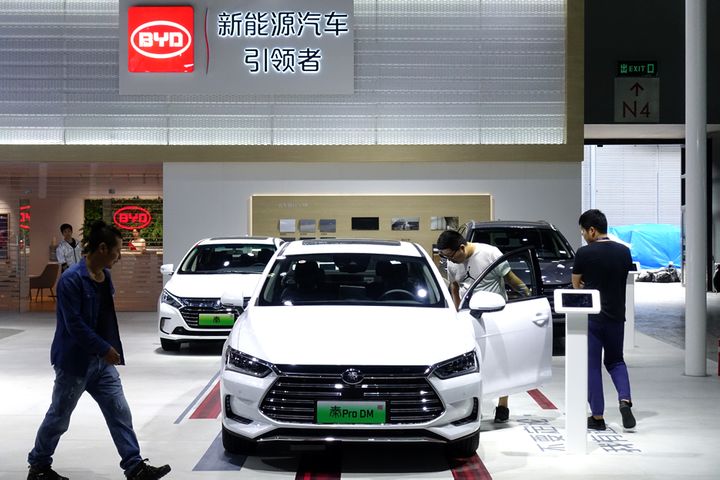 (Yicai Global) Oct. 30 -- Shares of BYD, China's biggest maker of new energy vehicles, slumped on the back of slowing profit growth in the first three quarters of the year as demand shriveled at home.

The Shenzhen-based company's stock price [SHE:002594] fell almost 6.8 percent today to end at CNY43.96 (USD6.23), pulling back from a decline of as much as 7.7 percent. The benchmark Shenzhen Component Index was off almost 0.7 percent.

BYD's net profit rose just 3.1 percent to CNY1.6 billion (USD222.8 million) in the nine months ended September from a year earlier, according to the firm's earnings report yesterday. That was anemic compared with the first half when profit tripled.

China's carmakers have been suffering a major falloff in demand since last year, the first downturn in the world's biggest auto market in over two decades. A phased withdrawal of government subsidies for NEVs also brought a flood of buyers before June and not many thereafter, an industry insider told Yicai Global. Electric vehicle sales declined for three months in a row through September.

BYD was one of the few carmakers to increase nine-month earnings, according to financial reports published so far. BYD even boosted its global market share by 2 percentage points to 12 percent during the eight months ended August, while solidifying its global lead, according to sales data. But then came September.

From January to September, BYD's total sales jumped 34.3 percent to 356,800 units. More than half were NEVs.  But in September alone, its NEV sales more than halved.

That same month, China's total NEV sales dropped 34.2 percent to 80,000 from a year ago, according to data from the China Association of Automobile Manufacturers. The industry group cut its NEV sales forecast for this year 6 percent to 1.5 million. Only about 58 percent of that was fulfilled by September.

Reaching the target will be difficult, according to Chen Shihua, CAAM's assistant secretary general.