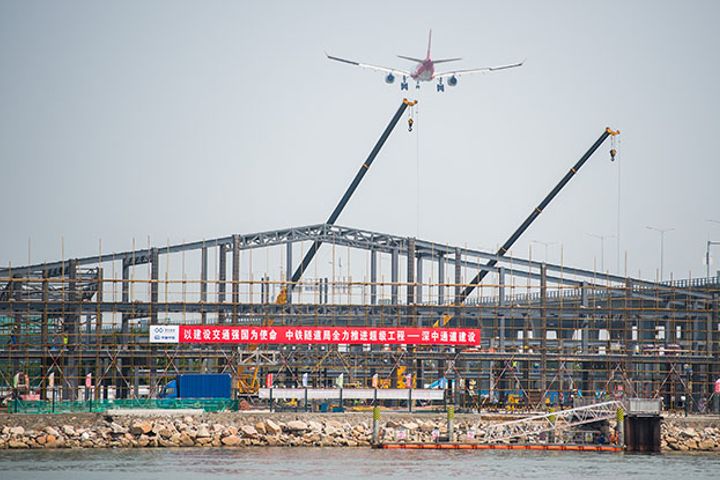 (Yicai Global) Nov. 7 -- The Civil Aviation Administration of China has signed a framework agreement with Guangdong province to guide the construction of an airport cluster in the Guangdong-Hong Kong-Macro Bay Area, one of China's most developed regions.

The CAAC and provincial government signed the contract on Nov. 5.

Under the deal, CAAC will help Guangdong province formulate development plans for the world-class airport cluster in the bay area and promote cooperation with Hong Kong and Macau to invest in and construct an airport cluster with shared resources, a clear division of tasks, superior functions and coordinated development.

The region is also one of the most economically dynamic areas, with a developed local economy that require airports at all levels to afford convenient movement of people and goods.

Economic development and a swelling population will intensify the shortage of airspace resources in the area, making it necessary for each airport in the region to realize a rational division of tasks and differentiated operation, Professor Li Xiaojin, a senior expert in civil aviation, told Yicai Global.

The agreement mandates that efforts must go to enhance the competitiveness of the Guangzhou and Shenzhen airports as international aviation hubs. Hastening the preparatory work for the phase three expansion project of Baiyun Airport and the construction of freight terminal facilities to enhance its international transfer functions and create international transport channels connecting it with Europe, the Americas, Oceania and Africa is thus necessary.

Guangzhou Baiyun International Airport is one of the three major aviation hubs in China, with its passenger and goods and mail throughput reaching 65.8 million and 1.8 million tons, respectively, last year.

The agreement also makes clear that CAAC will support Shenzhen Bao'an International Airport in adding new international routes and upping the frequency of existing ones, extending the international air route network that focuses on the Asia-pacific region and connection with Europe and the US, and improving the domestic network of medium-and long-distance trunk routes.

The agreement also requires that, while building, renovating and expanding high-traffic and regional airports, Guangdong province must comprehensively arrange for general aviation functional areas, and set aside land for a series of general airports in Guangzhou, Foshan, Dongguan, Jiangmen and Zhaoqing and other places.