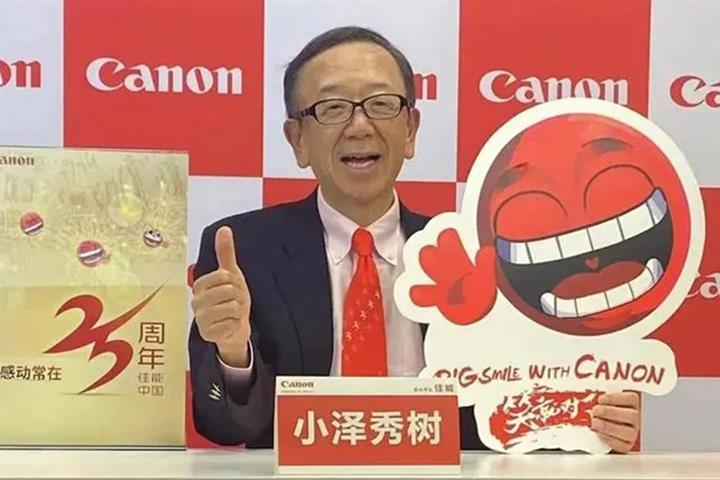 (Yicai Global) Nov. 9 -- Ozawa Hideki, chair and chief executive officer of Canon China, believes that the country still has great potential despite the Covid-19 impact and hopes that the Japanese camera giant can hold its ground in the Chinese market.

“Canon Chairman and CEO Mitarai Fujio often says China has the greatest potential and will definitely achieve huge development in the future, and that’s why I have lived in the country for 18 years,” Hideki told Yicai Global in a video interview on Nov. 4.

Hideki first came to China in the early 1980s, when the country was in the early stage of reform and opening up. He started a new career in 2005 when he returned to China as CEO of Canon’s Chinese business. He saw huge changes in infrastructure, people’s livelihood, and technology throughout his years in China, as the nation achieved remarkable results.

“I admit it is tough and perplexing to decide Canon China’s strategic orientation and future development in China,” Hideki added. “It is an issue not only for Canon China but also for other foreign companies doing business in the country.”

Hideki did not leave China during the Covid-19 pandemic. This summer, he managed to go back to Tokyo after very long. During his time in his home country, Hideki had in-depth communications with the senior executives of Canon’s headquarters, hoping to offer them more information about what was happening in China.

This year marks the 25th anniversary of Canon entering the Chinese market.

Hideki was unable to come to Shanghai for the China International Import Expo this year because of the inbound quarantine requirements, the biggest regret for him after having participated in the previous expos.

“I really wanted to go to the expo as we did a lot to celebrate the 25th anniversary of Canon China, but pandemic prevention and safety are more important,” Hideki pointed out. “Now it is hard for me to frequently go back to the HQ in Japan, but I still think China has great potential and hope the firm to hold its ground in the Chinese market.”