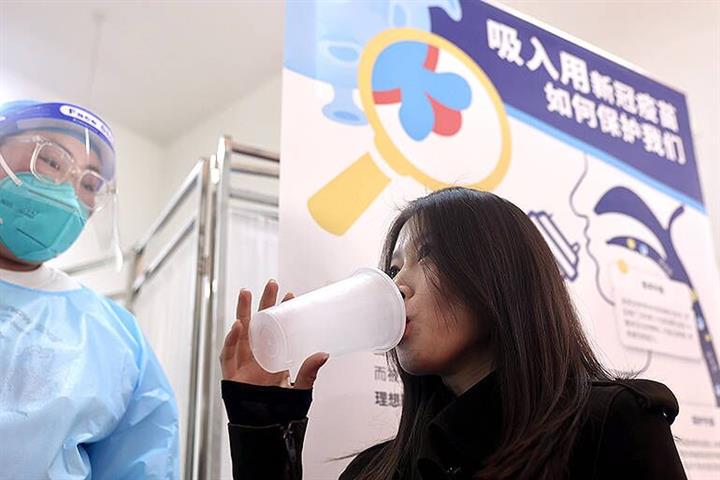 China’s capital city started to roll out the needle-free vaccine on Nov. 16, Beijing Daily reported yesterday. According to local media reports, more people had formed a line for the nasal booster than the conventional jab at the vaccination center on Shangdi Road in the city’s Haidian district.

Hangzhou become the first city in Zhejiang province to begin administering the inhaled vaccine on Nov. 14. Shanghai’s official WeChat account announced that the megacity would start using it from Oct. 26.

Keweisha, the world’s first adenovirus vector Covid-19 vaccine based on nebulized inhalation, was approved for emergency use by the National Medical Products Administration as a booster shot in September.

The vaccine uses adenovirus vectors to deliver genetic material expressing S protein into the human body, according to reports. It is atomized into tiny particles via a nebulizer and inhaled via the mouth, reaching the upper respiratory tract and lungs and finally stimulating the triple immunity of mucosa, body fluids, and cells.

To minimize the impact of Covid-19 on economic and social development, China recently put forward 20 measures to optimize the epidemic’s containment and make Covid-19 prevention and control more reasonable.

Regulators are formulating plans to accelerate the promotion of Covid-19 vaccination, Shen Hongbing, deputy director of the National Administration of Disease Control and Prevention said in a press conference on the progress of new prevention and control measures yesterday.

More than 1.3 billion people in China, equal to 92.5 percent of the population, are fully vaccinated against Covid-19, of which 893 million, or 67 percent of the total, have had booster shots, data released by the National Bureau of Statistics showed on Nov. 4.

Some 239 million people over 60 years old, or 90.6 percent of the group’s total, had completed immunization for Covid-19, of which 86.3 percent were fully vaccinated and 74.2 percent received booster shots, according to the NBS.