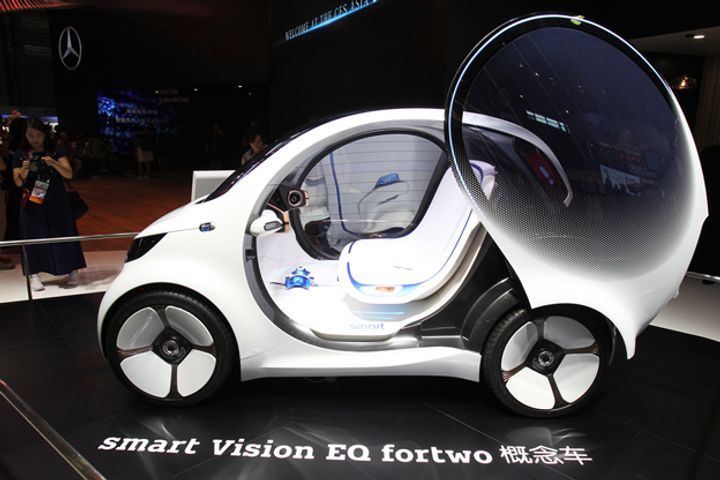 (Yicai Global) June 15 -- This week's Consumer Electronics Show Asia has been as hot as the weather in host city Shanghai.

Since CES Asia showcases the trends in China's consumer electronics better than its Las Vegas counterpart, overseas participants are even more enthusiastic. The head of a US cloud services company in China told Yicai Global they've been paying attention to CES Asia for two years now and are looking for the right time to join the action.

This year's gathering, the fourth, is being held at the Shanghai New International Expo Centre between June 13 and 15. One in five exhibitors are startups, with artificial intelligence and self-driving technologies two highlights. Carmakers and home appliance giants constitute the bulk of exhibitors.

The exhibition has expanded the area devoted to the automotive sector by 50 percent this year, making it CES Asia's biggest vehicle tech zone to date. Just over one in 10 of the total 500 exhibitors are in auto tech, according to the Consumer Technology Association, which organizes the event. International brands attending include Cadillac, Mercedes-Benz, Honda, Hyundai and Kia. Representing China are Byton, Guangzhou Automobile and Singulato.

Over the past three days, visitors have experienced firsthand the latest breakthroughs in self-driving cars, with the leading global carmakers and original equipment manufacturers unveiling new autonomous technologies and concept vehicles.Mercedes-Benz released localized products for Chinese consumers. They included a voice recognition system for Mandarin, Cantonese and even Sichuan dialect on Chinese apps such as WeChat and Dianping.

German auto parts maker Continental has never missed a CES. This year the company debuted its AllCharge Univers, a system compatible with all types of charging piles and features an electric power integrated system that can be transferred to a master key. Despite being a traditional auto parts maker and supplier, Continental has position itself as a tech company.

It seems almost no new consumer drones were launched at CES Asia this year. On offer this week from developers such as Beijing-based Robosea and Shanghai-based Youcan Robot were underwater models, a new hot product.

"The consumer drone market has been almost monopolized by DJI, so the number of new products has plunged," an industry insider told Yicai Global.

Developers of unmanned submersible vehicles face huge market opportunities compared with makers of unmanned aerial vehicles. The UAV market's period of fast growth has ended and it has come under tighter regulation.

"Technical difficulties facing underwater drones are communications and control, and several companies are competing with DJI in the wireless image transmission technology," the insider said.

Enterprise-level products can be used for aquatic surveillance, mapping and real-time communications. Consumer versions have cable-free handling, shooting, 4K video recording and a return function in the event of a communications failure.

The market potential is huge, and its potential has yet to be fully tapped, said Robosea founder Xiong Minglei. It's likely to see growth rates similar to the UAV market before it, but competition will thin out the pack.