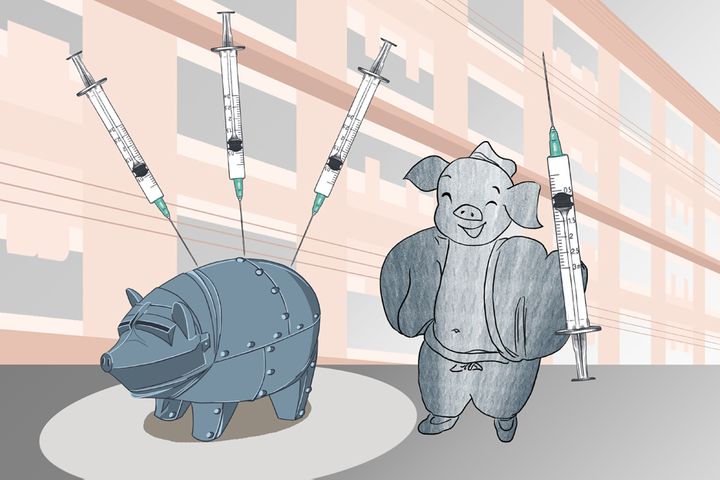 (Yicai Global) July 4 -- Outbreaks of African swine fever in China are on the decline and its pig-breeding sector is returning to normal, according to a senior official at the Ministry of Agriculture and Rural Affairs.

Also known as 'pig Ebola', the virus causes pigs to bleed internally to death and so far there is no cure. While highly contagious and fatal to hogs, it is harmless to humans. Since the first outbreak last August, over 1.2 million pigs have been slaughtered in China.

Statistics show that progress has been made. Since the beginning of the year only 44 cases have been recorded and with the exception of April, there have been less than 10 new cases each month. The affected areas in China's 25 provinces have all had their trading bans lifted.

However, prevention and control of the disease still remains a complex matter. China is the world's largest pig breeder and an outbreak of swine fever affects more pig farms and pigs in China than all the other affected countries combined, according to the ministry official. Just 13 of 68 countries infected with swine fever have succeeded in eradicating it, and it took years, even decades, to do so, he said.

As a result, the government has banned the feeding of kitchen waste to pigs among many other measures. Those who cause the outbreak and spread of swine fever by feeding pigs contaminated foods will be held accountable and will not be eligible for government subsidies to slaughter infected animals.

The government should continue to support and improve the pig-breeding sector, the report said, by helping to relocate infected hogs away from large-scale pig farms and providing credit support to affected farms that meet the necessary conditions. It should also help to plan the development of large-scale farms and ensure availability of land for the construction of supporting facilities.