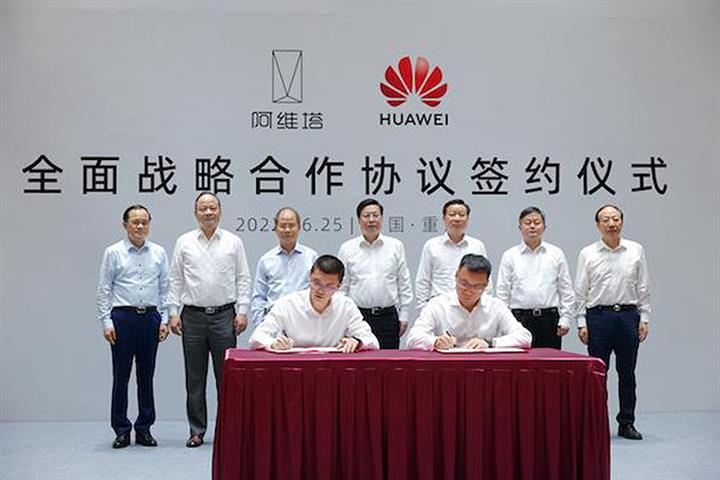 The pair will share the risks, revenue and Huawei Inside’s trademark, according to the comprehensive cooperation agreement they inked on June 25.

The EV models will be based on CHN, a smart platform co-developed by Changan, Huawei, and Chinese battery giant Contemporary Amperex Technology that was launched at the annual Chongqing International Auto Exhibition on June 25.

Huawei will be responsible for developing the self-driving and smart cockpit software systems, while CATL will provide the power battery technologies, said Tan Benhong, chairman and chief executive of Avatr. As a strategic partner, Huawei is deeply involved in Avatr’s technological development despite having no equity stake in the automaker, Tan added.

Set to go on sale from Aug. 8, the Avatr 11 will be the first car jointly developed by Huawei and Avatr to hit the market. It has Huawei’s smart driving, smart cockpit, intelligent network, smart electrification, and full-track smart vehicle solutions, as well as its smart vehicle cloud services, said Chi Linchun, head of marketing and sales at Huawei’s Smart Car Solutions Business Unit.

Founded in May last year, Avatr’s predecessor made Changan’s high-end new energy vehicles codenamed AB. It plans to open showrooms, both directly run and franchised, in 110 cities in China this year.

At just over 39 percent, Changan Auto is Avatr’s biggest shareholder. A consortium led by CATL is its second largest, with an almost 29 stake.

Avatr has been promoting its Series-A fundraiser and plans to go public in the future, attracting more strategic partners from more diverse backgrounds, Tan added.