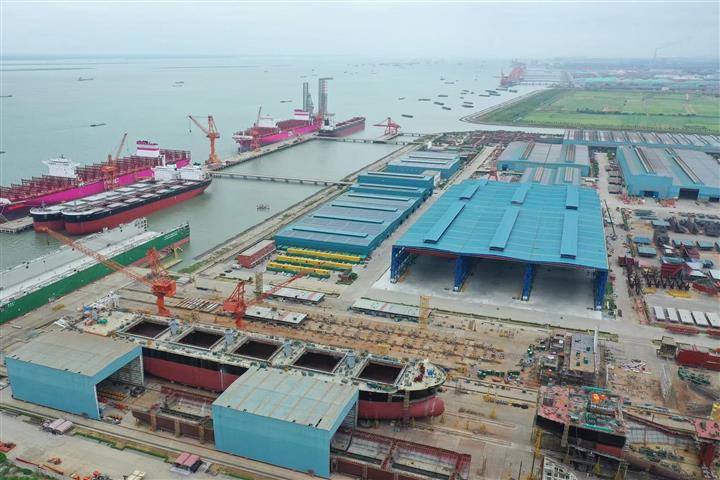 (Yicai Global) Sept. 15 -- China’s shipbuilding industry has surpassed Japan and South Korea to rank as No. 1 worldwide and the future focus will be clean energy.

The domestic industry has expanded to beat those of all other countries in the number of completed ships, new orders, and orders on hand, according to British maritime data provider Clarksons Research.

China snatched nearly 50 percent of new orders last year. In the first half of this year, its number of fresh orders exceeded those of Japan and South Korea.

Maritime logistics demand has been rising since the Covid-19 pandemic. Last year, the volume of new shipbuilding orders was the highest since 2014. The boom is expected to signal the start of a super cycle after that from 2003 to 2008, according to several research reports.

The world's second-largest economy dominates in several segments. China's market share was the highest in 10 out of 18 major ship models in 2021, per Clarksons. Its market shares in the segments of container ships, bulk carriers, chemical tankers, multi-purpose ships, and pure car and truck carriers are all over 50 percent.

Most of the ships that China exported in the first half are bulk carriers, oil tankers, container ships, and gas tankers, making up 68 percent of the country's total vessel exports, per statistics from the CANSI.

The industry is shifting to green technologies. Late last year, the International Maritime Organization, an agency under the United Nations in charge of regulating shipping, passed a proposal requiring shipping companies to cut their carbon dioxide emissions in the short term.

The tightening regulations should speed up ship upgrades, and boost the development of vessels powered by liquefied natural gas and other low-emission fuels, many industry insiders said.

China is also working hard on clean logistics. The Ministry of Industry and Information Technology, the National Development and Reform Commission, and the Ministry of Ecology and Environment jointly issued a document last month to encourage maritime companies to come up with greener and smarter technologies.

Shanghai-based Hudong-Zhonghua Shipbuilding Group, the only Chinese shipbuilder which can make LNG-powered vessels, has set up plans to upgrade its green offering by 2035. Shanghai-headquartered Jiangnan Shipyard Group has said it will build a research and development center for low-carbon ships that make use of fifth-generation wireless networks and Big Data.

China received orders to build 30 LNG-powered ships with a cargo capacity of 174,000 cubic meters in the first half, making up nearly 33 percent of the global total. The portion of green energy-powered ships in the new orders rose to 45 percent from last year's share of 24 percent.