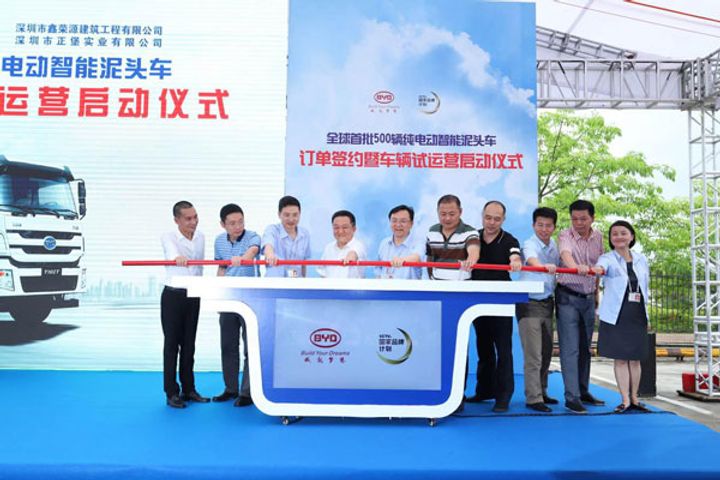 (Yicai Global) May 9 -- China's new energy vehicle maker BYD Auto Co. signed a contract for 500 electric dump trucks for construction companies in Shenzhen, the southern Guangdong province. The deal marks the largest sales order of its kind for the company.

The contract for the 500 BYD T10ZT electric dump trucks was signed in Pingshan district of Shenzhen between the NEV maker and a group of Shenzhen companies, reported Shenzhen News.

BYD's T10ZT bus has maximum grade ability of 50 percent and capacity of 10.6 square meters. The model is installed with BYD's leading lithium-ion batteries with a total capacity of 435 kWh and could be fully charged in just one and a half hours, enabling the truck to run as long as 280 kilometers, the company said.

Apart from T10ZT, BYD will also make a pure electric concrete mixer to use urban construction logistics to solve the high pollution, high emission and noise problems in urban buildings to meet the demand of construction companies.

BYD began to develop new energy trucks in 2012. The carmaker also set up the truck and special vehicle research institute in 2014. Over the past three years, BYD has taken the worldwide lead to achieve large-scale commercialization of pure electric sanitation trucks, tractors and other pure electric heavy-duty trucks.