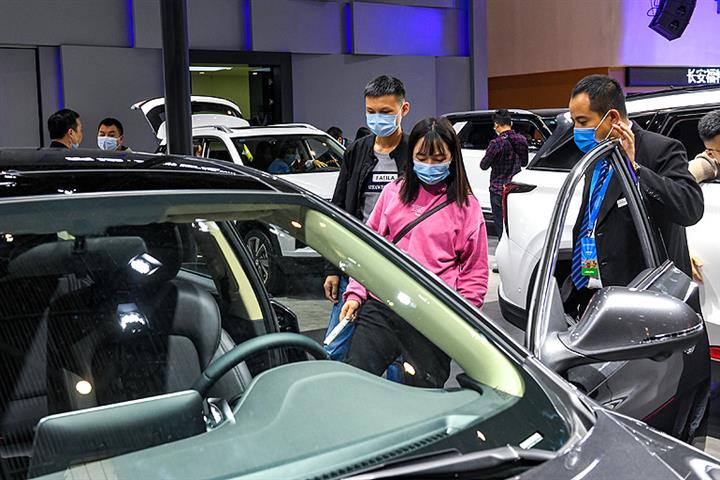 (Yicai Global) March 9 -- China’s passenger car sales jumped by more than four times last month from a year ago as the market recovers from the impacts of the Covid-19 pandemic with a new energy vehicle boom.

Sales quickly rebounded after the Chinese New Year holiday to reach nearly 1.2 million, almost the same level as in February 2019, the China Passenger Car Association said in a report released today. But the number was 45.5 percent lower than in January as the one-week holiday affected consumption in February.

March is predicted to be busy as the month has more working days than others this year. In the first quarter, passenger car sales are expected to rise by 11 percent to 2.1 million from a year ago due to the low base of last year, according to the CPCA. That should set a foundation for increases throughout this year.

As the government recommended residents to avoid traveling during the Lunar New Year holiday, many went to visit car showrooms in big cities, according to the report. But outlets in small cities were quiet.

NEVs continued to shine. Some 97,000 NEVs were sold last month, almost an eightfold increase from a year ago. But the figure was almost 38 percent less than in January 2021. SAIC-GM-Wuling Automobiles was the biggest seller in February with its more than 20,800 units, followed by Tesla China (over 18,300), and BYD (more than 10,200).

Electric vehicles are expected to replace combustion engine cars. NEVs made up 8.2 percent of February sales, but that portion should rise to at least 20 percent by 2025 and exceed 50 percent by 2030, according to a report by UBS China.

The luxury market has recovered faster than others. Premium car sales surged by almost six times in February from a year ago. And the volume was even 36 percent more than two years earlier as consumers were looking for upgrades.

Sales of domestic car brands, as well as those made by mainstream joint ventures, more than quadrupled from a year ago. FAW-Volkswagen, SAIC-Volkswagen, and Changan Automobile were the most popular manufacturers on the list.