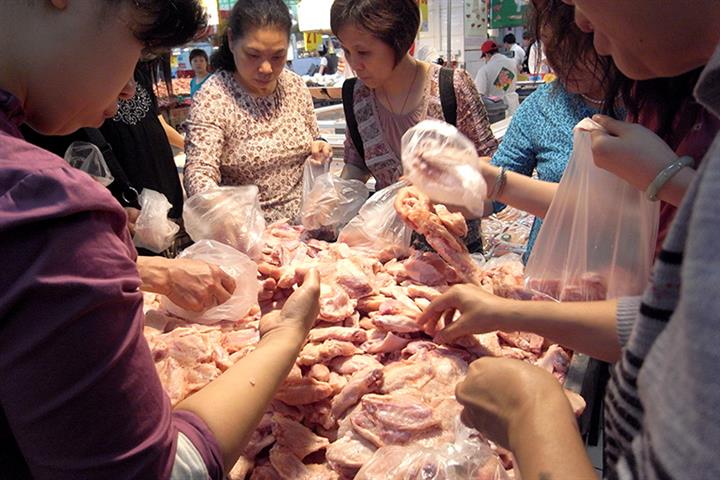 (Yicai Global) Sept. 14 -- The cost of chicken meat in China fell for the first time in nearly three years last month because of increased production and weaker demand. A recovery in prices is unlikely, according to analysts contacted by the Economic Daily.

The average price of a broiler fell 1.6 percent in August from a year earlier, data released by the National Bureau of Statistics showed. By contrast, pork surged almost 53 percent.

Two factors contributed to the dip, the Economic Daily reported on Sept. 12, citing Zhang Li, a researcher at the Agricultural Information Institute of the Chinese Academy of Agricultural Sciences. First, production expanded rapidly following an epidemic of African swine fever last year. From January to July this year, sales of white-feather broilers jumped 14 percent to 2.8 billion.

The second factor was weak consumer demand. The Covid-19 pandemic greatly impacted the catering sector and consumption generally. A large number of chicken products and frozen inventory from before the outbreak sold slowly as demand fell.

Demand for chicken as an alternative to higher priced pork has picked up a little after recent torrential rains and floods in southern China hampered transportation in the region. The average price for live broilers in the fourth week of August reached CNY19.9 (USD2.90) a kilogram, a 0.6 percent month-on-month gain.

Despite that, analysts still say prices will struggle to rise after this year, and may even fall.

Zhang believes prices may still have room for increase in the short term, spurred by seasonal consumption -- next month has the National Day and Mid-Autumn Festival holidays, universities and schools will reopen -- and rising pork prices due to higher feed and operating costs. In the long run, a sharp rise in chicken prices is unlikely because of plentiful production.

The number of white-feather broilers sold from the second half to next year is predicted to shrink if calculated in terms of production cycles and renewal of egg-laying birds, according to Sun Ya’nan, an analyst at China’s commodity pricing platform Sci99. The market may have a chance of rebounding, he added.

But Wang Ying, an agricultural analyst at Hua’an Securities, believes prices are already in a downward trend because of the supply cycle of white-winged broilers.