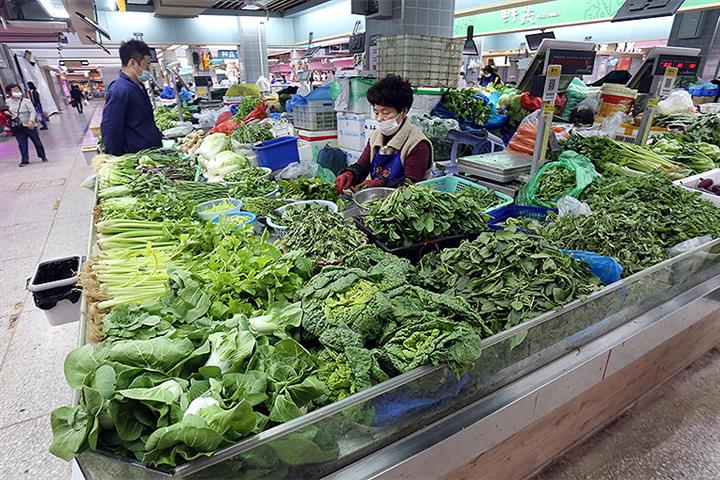 (Yicai Global) Nov. 22 -- China's inflation is under control in comparison with other major economies amid an abundant supply of food and declining energy prices, according to the economic planning agency.

Compared with other major economies, China's price levels are controllable as the supply of important livelihood products, such as grains, edible oil, meat, eggs, milk, fresh fruit, and vegetables is sufficient and prices of energy resources such as coal are falling sharply, the National Development and Reform Commission said in a statement on its WeChat account and website yesterday.

China's consumer price index, the main gauge of inflation, climbed 1.5 percent in October from a year ago, the National Bureau of Statistics revealed earlier this month. The pace of rising was accelerating as the CPI had edged up 0.7 percent in September from a year earlier. From January to October, the CPI rose on average by 0.7 percent each month, the NBS added.

Meanwhile, inflation is rife around the world. The CPI of the United States grew 6.2 percent in October from a year ago. The gauge of the eurozone climbed 4.2 percent and that of Russia surged by 7.4 percent.

Price levels can remain stable, largely due to the growth of agricultural production and grain harvest, Xu Guangjian, a professor at Renmin University of China and vice president of the Price Association of China, said to Yicai Global. The stability is mainly caused by a sufficient supply of major agricultural commodities and by-products, especially live pigs and pork, Xu added.

China’s annual grain output has remained steady at above 650 billion kilograms for seven straight years, with per capita share of 474 kg, the Ministry of Agriculture and Rural Affairs said earlier this year. Vegetables are expected to meet the demand in the next three months, based on an estimate of 1.5 kg per person per day, it added.

In terms of aquatic products, China’s output has ranked No. 1 globally for 32 straight years, the ministry added. Moreover, beef, mutton, and milk production in the first three quarters of this year all expanded from the same period of last year.

China has taken measures to expand its production capacity, said Xu. It aims to increase its national reserves and guide reasonable expectations in order to tackle great fluctuations in the prices of energy sources, including coal, and to curb excessive price hikes of some raw materials, he added.

The supply of important commodities is sufficient for people’s livelihood in China, said Guo Liyan, office director at the Chinese Academy of Macroeconomic Research. Transport and distribution are going very smoothly, even with snowfall, thanks to the developed logistics network, so prices are not expected to climb due to supply shortages, Guo added.