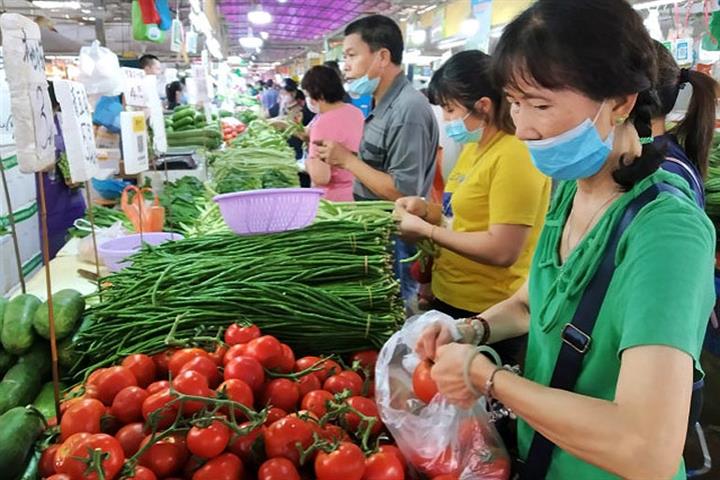 (Yicai Global) Oct. 15 -- China's consumer price index, a main gauge of inflation, fell below 2 percent for the first time in 18 months last month on more modest gains in food prices and is likely to drop further in the next quarter, experts say.

September’s CPI rose 1.7 percent from a year earlier, but was 0.7 percentage point down from August’s figure, the National Bureau of Statistics said today. The Yicai Chief Economist Survey released on Oct. 11 had forecast a growth rate of 1.87 percent.

Inflation has been mostly affected by food prices since the start of the year, in particular pork prices, NBS spokesperson Fu Linghui said. There is likely to be a higher CPI in the first half and a lower CPI in the second half as falling prices carry over into the third and fourth quarters.

The slowing inflation was mainly due to a more moderate rise in food prices, which rose 7.9 percent, much less than the gain of 11.2 percent in August, and which contributed 1.69 percentage points to the CPI growth.

Surging pork prices in particular stabilized with a 25.5 percent gain from a year earlier, less than half of August’s gains.

Pork prices have begun to show a downward trend and might return to normal levels from the middle of next year, said Liu Yonghao, chairman of agricultural products’ producer New Hope Group.

The recovery of China’s swine herds after a debilitating bout of African swine fever has put the brakes on the rise in pork prices, said Wu Ge, an analyst at Changjiang Securities. Considering the high gains last year, the CPI is likely to come down in comparison in the fourth quarter, he added.

The CPI could fall to around 1 percent in the fourth quarter, said Wu Chaoming, vice director at the Chasing Institute.

China's producer price index, which measures costs for goods at the factory gate, fell 2.1 percent in September year on year, although it edged up 0.1 percentage point from August, the NBS said.

It comes substantially lower than the minus 1.84 percent growth projected by the Yicai Chief Economist Survey.

The price of making goods for production decreased 2.8 percent in the September, down 0.2 percentage points from August, while the price of making consumer goods dropped 0.1 percent, reversing last month’s entry into positive territory.

The recovery of domestic demand, especially through an increase in infrastructure and real estate investment, will support industrial goods prices, Wu said. China's PPI will gradually pick up over the next few months despite the continuing spread of the pandemic overseas, growing uncertainties in the global economy and for a lack of foundation for a substantial gain in commodity prices.

The Covid-19 outbreak's resurgence has not prevented a moderate bounce back in the global economy, Wu said. But PPI growth is expected to remain conservative in the short term as both the recovery in shale oil capacity and the cut in crude oil production will curb oil prices.