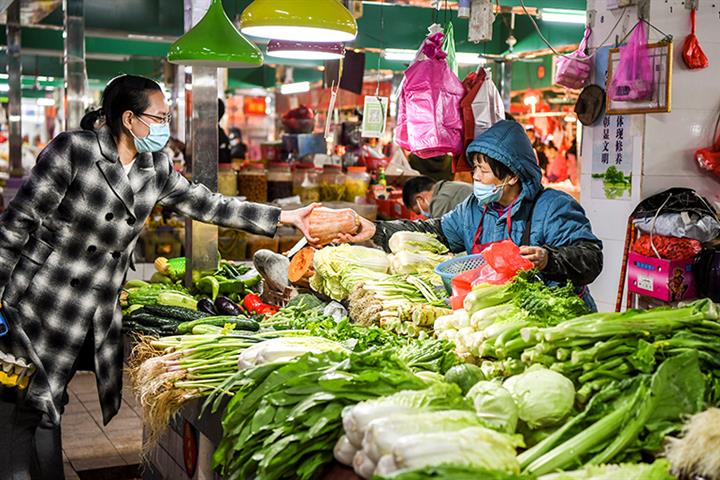 The consumer price index rose 0.9 percent in the 12 months, and the producer price index climbed 8.1 percent, the National Bureau of Statistics said today.

The gain in the CPI was well below the central bank’s target of about 3 percent and was slower than the 2.5 percent clip logged the year before. The PPI fell 1.8 percent in 2020. Experts expect the gap between the two main inflation measures to narrow this year.

Last month, the CPI rose 1.5 percent from a year earlier, slower than the 1.74 percent average predicted by chief economists polled by Yicai Global. The gain was also 0.8 percentage point lower than the previous month. The December PPI surged 10.3 percent, below a forecast 11.12 percent and 2.6 points less than in November.

The scissor-like gap between the two narrowed to 8.8 points in December, after shrinking 1.8 point from the prior month.

A decline in pork prices and limited growth in non-food costs amid the pandemic caused the CPI to drop from a year earlier, said Wu Chaoming, chief economist of Chasing Securities.

Wen Bin, chief researcher at China Minsheng Bank, noted that the slight decline in international crude oil prices, which had increased significantly, and lower commodity prices, have led to a sharp drop in PPI growth. The December PPI fell 1.2 percent month-on-month, the first decline since June 2020.

Regarding the trend this year, China Development Bank Securities pointed out that the CPI may be driven up by higher pork prices in the second half and the recovery of the service sector. The PPI, meanwhile, will be affected mainly by factors such as the impact of the pandemic on the supply chain, energy prices and labor costs.

The difference between the two may narrow to about 1.5 percent this year, and the mid-downstream profits are expected to recover to some extent, it added.

The CPI may rise moderately in 2022 as the service sector recovers with investment and consumption and pork prices rebound, but it is unlikely to gain sharply, according to China Loyal International. PPI growth, it said, may return to normal amid domestic policies to ensure supplies and stabilize prices, an eased supply-demand imbalance, as well as slowing global inflation.

Zheng Houcheng, director of the Yingda Securities Research Institute, said that in the context of a rebound in pork prices, a smaller rise in oil prices and the low probability of completely eliminating the pandemic, the CPI is expected to gain moderately.