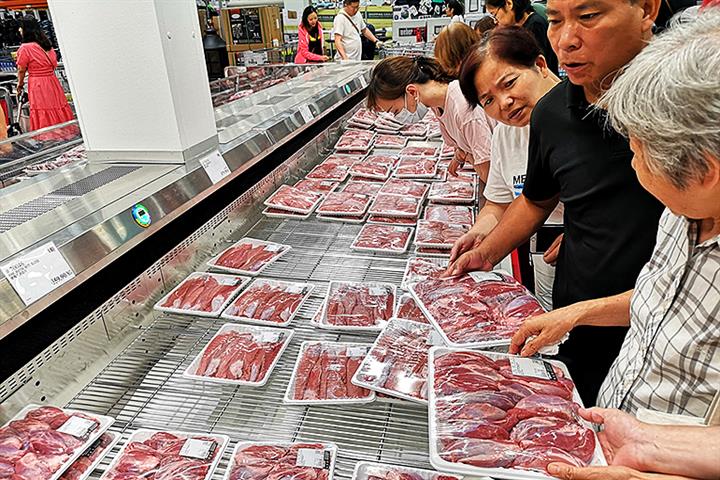 (Yicai Global) Sept. 10 -- The slowdown in China’s consumer inflation last month is further evidence of economic recovery, according to analysts, who nonetheless expect the government to roll out fiscal policy support more quickly because of a sluggish revival in demand.

China is in a period of dynamic coordination between production and demand, Zhang Liqun, a guest analyst with the China Federation of Logistics and Purchasing, said before yesterday’s publication of August’s consumer inflation data. But demand is picking up more slowly than production, underscoring the need to quickly bolster the effect of policies aimed at boosting demand, he said.

The consumer price index, the main gauge of inflation, rose 2.4 percent in August from a year earlier, according to figures released by the National Bureau of Statistics. That was slower than July’s 2.7 percent increase as pork-driven gains in food prices eased.

Food prices, which account for almost one-third of the weighting in China’s CPI, jumped 11.2 percent from a year earlier, slowing from a 13.2 percent gain in July. The cost of pork climbed 52.6 percent, down from an 85.7 percent surge in July.

The headline CPI figure was the same as that predicted by 25 chief economists at major Chinese financial institutions polled by Yicai Global. Expectations were partly guided by a higher base figure for pork prices a year earlier when the cost of the meat rose sharply due to outbreaks of African swine fever.

China’s pig herd is recovering, but pork prices are likely to continue to rise because of seasonal consumption, such as the Mid-Autumn Festival and the National Day holiday, analysts said.

Non-food prices climbed just 0.1 percent in August, not a strong driving force for the CPI as service consumption demand recovered slowly due to the Covid-19 pandemic, noted Wu Chaoming, deputy director of the Caixin Economic Institute.

The core CPI, which strips out food and energy, rose just 0.5 percent last month, the same record low pace as in July.

China’s economy is recovering steadily, according to the purchasing manager’s index and import, export and foreign exchange data released earlier. But domestic demand is still weak, the core CPI and producer price index show, so the nation will hasten implementation of proactive fiscal policies and adopt a neutral monetary policy.

Economic growth is expected to return this half, with domestic pandemic prevention and control as well as economic and social activities basically normalizing, Wu said. He expects China to focus on structural monetary policies instead of phased ones, and that they will be more flexible and suitable for supporting financial and structural programs and tackling external uncertainties.

The CPI will continue to fall, while the producer price index will keep rising, according to Wu Ge, chief economist at Yangtze Securities. International crude oil inventories have dropped with the gradual recovery of global demand, while the demand for steel has boomed, and PPI deflation has been further eased.

The PPI fell 2 percent in August from a year earlier, down 0.4 point from July, the NBS also said yesterday.

The overall inflation level will continue to fall, and zero growth is even possible at the end of the year, Wu said.