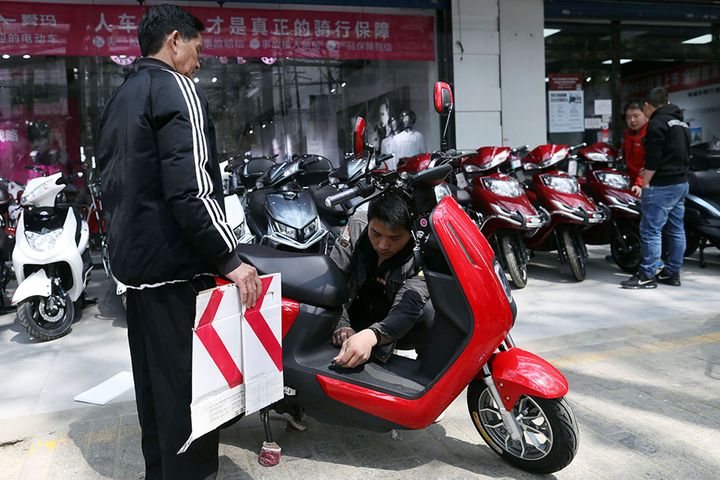 (Yicai Global) April 17 -- China has launched the most rigorous rules so far to control beefed-up electric bicycles, which is expected to make the world's biggest e-bike market even bigger, as many consumers and delivery firms need to change their vehicles.

The new rules that came into effect on April 15 stipulate that e-bikes must have pedals and they may speed up to a maximum of 25 kilometres per hour. These types of two-wheelers may weigh up to 55 kilograms, the strongest motor can involve 400 watts, and the most powerful battery can have 48 volts.

Products that do not fit the standards are illegal to be produced or sold in China. However, those bikes that do not match the new rules can be used for no more than five years during the transition period with temporary license plates.

A need for replacements could usher in an e-bike market worth at least CNY100 billion (USD14.9 billion) if each unit is priced at about CNY1,000 (USD149, industry insiders projected. China has 200 million such vehicles and makes more than 30 million units each year.

Food delivery service providers have started contacting vehicle manufacturers. "We are now cooperating with a well-known domestic e-bike maker to buy bikes that meet the new standard," Economic Information Daily reported, citing a staff member of Meituan-Dianping, one of the takeout giants.

Electric bicycles have surpassed the performance of scooters in recent years, as they feature high power and speed and no pedals to meet users' demand for performance, said Lu Yingzhi, an traffic safety expert at a research institute under the Ministry of Public Security. E-bikes fall between the guidelines for motor vehicles and non-motorized ones, she added.

Last May, China's market regulators approved the new rules which determine that e-bikes are non-motorized vehicles, with an aim to improve safety and order, and set the transition period to be 11 months.