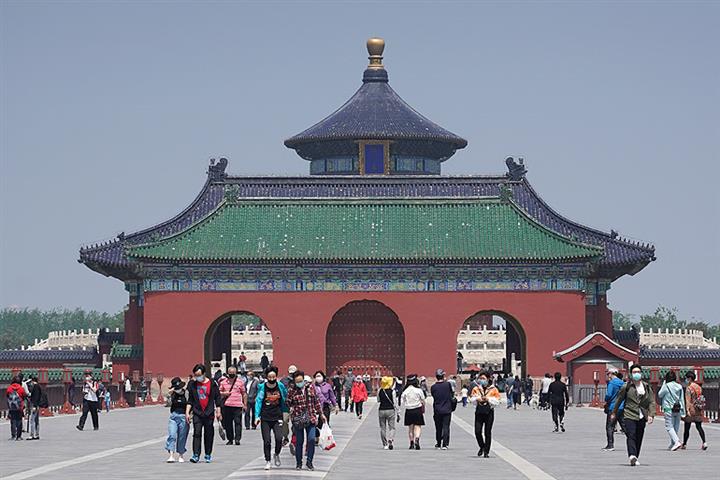 (Yicai Global) May 6 -- Domestic tourists in China spend some CNY47.6 billion (USD6.7 billion) during this year’s May Day holiday as tourism sectors picked up across the country.

Some 115 million people went traveling during the holiday, which ran from May 1 through May 5, about 60 percent of the total from the same period last year, according to figures from e-travel agency Tongcheng.

The figure was higher than expected, Tongcheng said, adding that daily average travel numbers were the highest since the Chinese New Year holiday earlier this year. Travel by boat was particularly popular, with passenger numbers making up 75.3 percent of the figure for April 30 to May 3 last year, and most people leaving their home did so to visit family.

Covid-19 has become largely under control in China and this has spurred demand for travel, said Wang Xiaosong, chairman of Chinese tourism platform Lvmama.

Most travelers came from Shanghai, Suzhou, Beijing, Nanjing and other major Chinese cities, with around 30 percent choosing to take a ‘staycation’ in their home town and 40 percent staying within their home province.

Various tourism spots, including mountains, historical sites, wild animal parks, old town and ecological resorts, all proved popular and most people began their trip on May 1 or May 2, according to figures from Tongcheng and China’s biggest online travel agency Trip.Com.

Chengdu, Shanghai and Guangzhou had the largest demand for accommodation stays during the holiday and the average price across China was CNY405 (USD57) a night, figures from Tongcheng show. That was up by about 42 percent from last year as the pandemic had a significant impact on supply and demand.