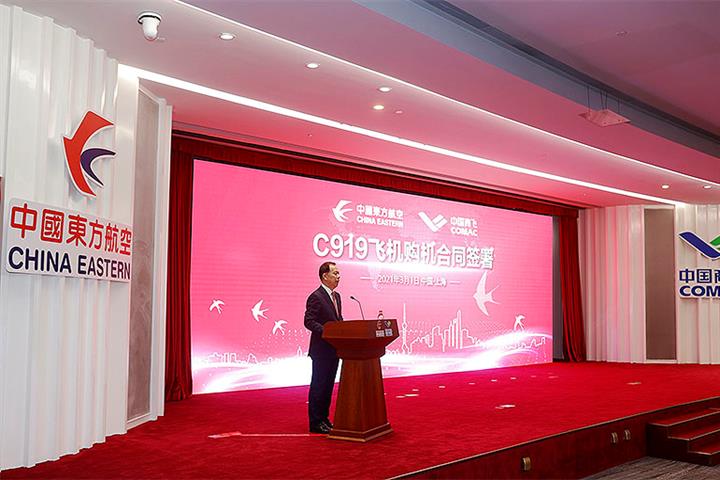 (Yicai Global) Sept. 24 -- China Eastern Airlines will become the first carrier to operate the C919 passenger plane designed by Commercial Aircraft Corporation of China after it officially signed a purchase order for five of the narrow-body jets.

China Eastern secured the five aircraft on March 1, and expected to receive them by December. It planned to base all five in Shanghai and operate them on flights to Beijing, Guangzhou, Shenzhen, Chengdu, Xiamen, Wuhan, and Qingdao.

COMAC began developing the C919 in 2008. It is China's first large single-aisle trunk airliner, with a range of up to 5,555 kilometers and as many as 168 seats, and meets international airworthiness standards. The Shanghai-based plane manufacturer reportedly had received over 1,000 orders from 28 airlines by March. It signed a framework agreement with China Eastern in 2010.

China Eastern is one of the country’s three major state-owned airlines. At the end of last year, it operated a fleet of over 730 aircraft.

Founded in 2008, COMAC undertakes China’s big passenger aircraft projects and has more than 8,300 employees. Its center for design, research and development took on the engineering design tasks and technical responsibilities of the C919 and the ARJ21 regional jet.

COMAC expects the world to need 30,230 trunk aircraft and regional jets by 2029, worth about USD3.4 trillion. The Chinese market alone will need more than 3,750 large passenger planes.