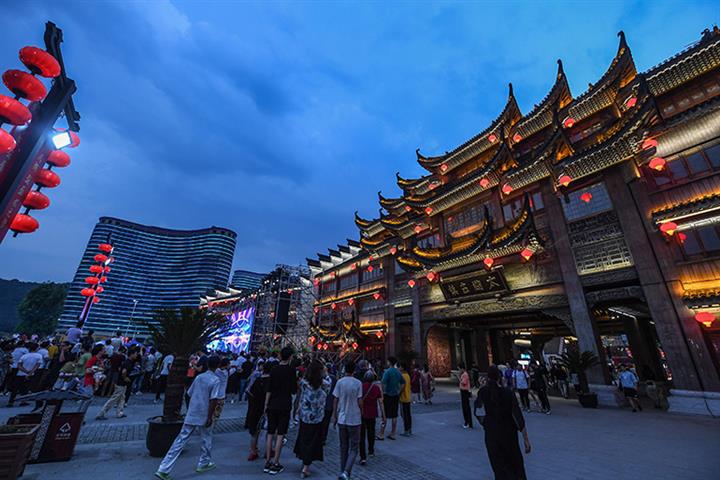 (Yicai Global) Sept. 15 -- August’s key economic indicators all showed stable growth, with consumer spending turning positive for the first time all year, according to figures released by the National Bureau of Statistics today.

Consumption should continue to rebound as the government has taken effective measures to get the Covid-19 pandemic under control, said spokesperson Fu Linghui. Increased demand helped to spur production which contributed to last month’s uptick. Investment has also steadily recovered, he added.

The rebound in consumption has been greatly helped by the measures taken to contain the spread of the Covid-19 pandemic and the fiscal policies implemented to boost spending, all of which have given rise to optimistic expectations of the macro-economy, Zheng Houcheng, head of Yingda Securities’ research institute, told Yicai Global.

China’s gross domestic product should pick up with the rebound in foreign trade and gradual increase in employment, according to a report by the Institute of Industrial Economics at the Chinese Academy of Social Sciences released today. The country’s GDP for the third quarter should reach 5.2 percent and for the year 4.1 percent, it added.

Fixed asset investment dipped 0.3 percent from January to August from the same period last year, narrowing the decline in the first seven months of the year by 1.3 percentage points. Infrastructure investment was also down 0.3 percent year on year.

The infrastructure sector will hopefully grow faster in the future, said Wu Chaoming, deputy director of Chasing International Economic Institute. The monthly growth rate of infrastructure-related investment is likely to stay in the double-digits thanks to early-stage investment and the commencement of projects.

Value-added industrial output, which measures the activity of designated large enterprises with annual turnover of at least CNY20 million (USD2.8 million), grew by 5.6 percent in August, 0.8 percentage point more than in July, the NBS said. In the first eight months it rose 0.4 percent from the same period last year.

The positive growth in China’s industrial added value does not mean that the ‘production end’ of the Chinese economy is now completely free from the impact of the novel coronavirus, Fu said.

China still needs to resolutely expand domestic demand, focus on unblocking the cycle of industrial chains, stabilize both industry and supply chains, so as to enable the stable recovery of the economy, he added.