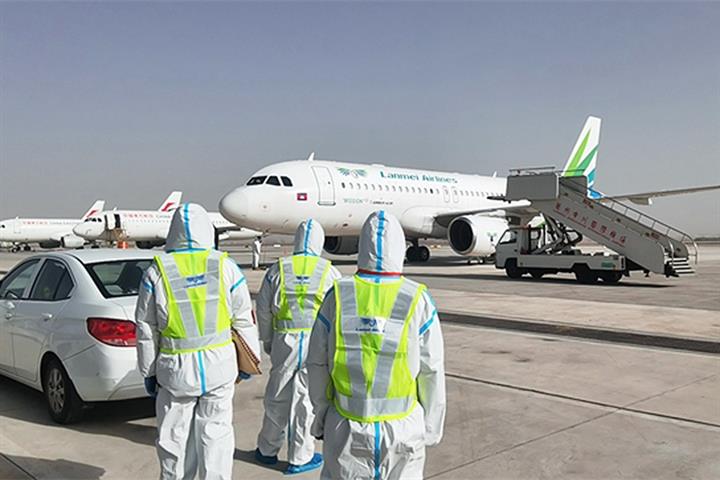 (Yicai Global) Jan. 13 -- The number of international flights into China that have been suspended in the past week for triggering the country’s ‘circuit breaker’ mechanism, which is when five or more passengers on a plane test positive for Covid-19, is already equal to half the number of flights in the whole of 2020. And the ‘super circuit breaker,’ when 10 travelers test positive on two consecutive flights on the same route, was triggered for the first time not once, but twice.

Forty-one flight routes to China have been halted since Jan. 6, resulting in the cancellation of 142 flights, according to the Civil Aviation Administration. In 2020, 272 flights were suspended.

The ‘circuit breaker’ mechanism was introduced in June 2020 as air travel poses the biggest entry point for imported cases of Covid-19. Any aircraft entering the country from abroad with more than five people testing positive is suspended for two weeks. Should there be more than 10 infected travelers, the flight route is halted for four weeks.

The ‘super circuit breaker,’ which results in an eight-week suspension, was triggered for the first time two times last week by Air China flight CA 988 from Los Angeles to Tianjin and China Southern Airline’s flight CZ 328 between Los Angeles and Guangzhou.

The new Omicron variant has resulted in a resurgence of the pandemic worldwide. China found 752 cases brought in from abroad from Jan. 1 to yesterday, a jump of more than two-and-a-half times from a month ago, according to the National Health Commission.

Although carriers request all passengers to present a negative test within six hours of departure, many travelers still test positive on arrival because the Omicron variant has a low viral load at the start and cannot be easily detected, a staff member at the United Arab Emirates’ Etihad Airways told Yicai Global.

Etihad Airways has already voluntarily cancelled all flights to China in the two weeks before Jan. 24 to avoid the ‘super circuit breaker’ and an eight-week ban that would stretch over the peak Chinese New Year holiday period, the person said.