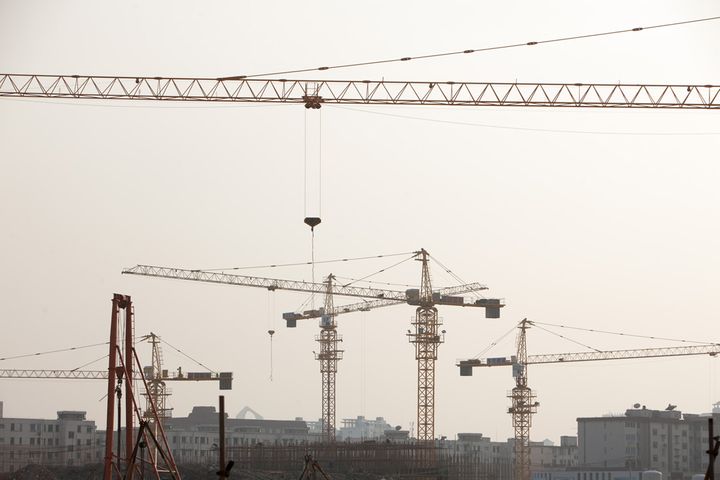 (Yicai Global) July 18 -- China's gross domestic product (GDP) reached USD5.61 trillion (CNY38.15 trillion) in the first half of this year, up 6.9 percent year-on-year and 0.2 percentage points higher than the GDP growth rate in the same period a year ago, data published yesterday by the National Bureau of Statistics show. Industrial output, the output indices for the service industry, residents' income and consumption all exhibited stable progress.

Growth in property investments is also worthy of attention. Between January and June this year, investment in China's real estate sector hit CNY5.06 trillion, up 8.5 percent year-on-year, 0.5 percentage points lower than the 9.3 percent gain seen in the January to April period, the data shows. The 8.5-percent growth rate remains high compared the first half of last year when property investment grew 6.1 percent year-on-year to CNY4.66 billion.

The property sector contributed greatly to China's 6.9-percent GDP growth rate seen in the first half of this year, which was up year-on-year. The real estate sector continued to underpin the Chinese economy due to rises in house prices showing no sign of abating until the first half.

Home price increases that started in first-tier cities such as Shenzhen and Shanghai in 2015 spread to neighboring- and second-tier cities last year, prompting such local governments to maintain or strengthen restrictions on home purchases and increase the supply of residential land. As a result, house price growth slowed or stalled.

A rally in house prices occurred this year and spread to third- and fourth-tier cities. Growth in home prices declined in first-tier and key second-tier cities in May, data on housing prices for 70 major Chinese cities show. Overall, average home prices rose 0.8 percent month-on-month in May, with increases mostly seen in third-tier and some second-tier cities in western China. Third- and fourth-tier cities also witnessed sharp increases in prices this year, forcing many to impose purchasing restrictions.

Higher house prices in third- and fourth-tier cities are partly due to monetary compensation paid to those affected by the redevelopment of dilapidated houses or shantytowns. Unlike previous arrangements under which shantytown residents saw their homes renovated to improve living conditions, such residents now receive monetary compensation to buy new houses, leading to house prices rising rapidly. Local governments aim to reduce house inventories by hiking prices. Historically, the volume of transactions is low when home prices fall or rise moderately as buyers expect prices to continue to drop, while demand will rise once prices go up. The higher volume of transactions seen during the price-increase period is a testament to that.

Local governments stand to gain from both rising house prices and falling inventories, though this scenario could lead to problems. On the one hand, residents in third- and fourth-tier cities do not lack houses as living space per capita is not low there. Such cities impose no purchasing restrictions, and many residents now own several homes. The property sector is already saturated and has a glut in supply, prompting more home purchases as people are expectant of further price increases. This can provide a boost to a local government's income and economic data, though in the long run, it does not provide a beneficial situation for the economy or for the lives of the residents.

Local governments may depend on the property sector for several more years. The real estate sector has helped to boost the development of a number of industries and has been a key driver of growth over the past decade. When an industry already suffers from oversupply, it becomes unfeasible to continue to count on it. China can not depend on its property sector if it wants to move beyond the middle-income trap and achieve economic transformation.

With six months passed already this year, the two-year long rally in house prices has ended and inventories have declined in cities from first-tier to third- and fourth-tier. It is impossible to continue to bolster the economy by hiking home prices. China's economy has come to a juncture and it must wean itself off its dependency on the property sector.