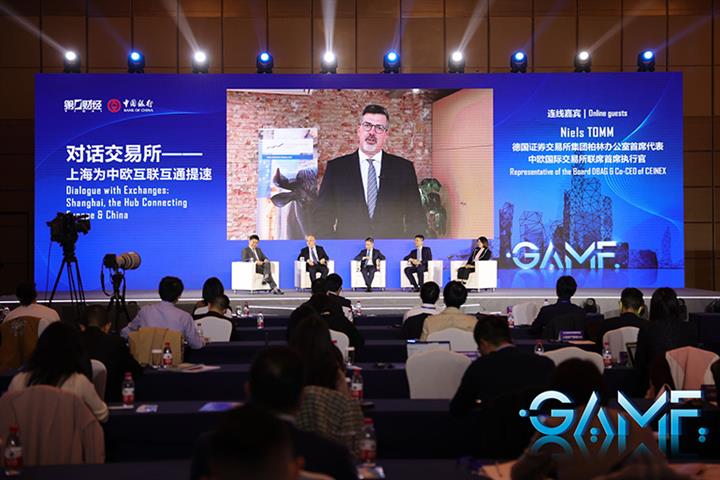 (Yicai Global) Nov. 30 -- The China-Germany stock connect program is technically all set to go, according to Niels Tomm, Deutsche Börse Group’s board representative.

Deutsche Börse, the Shanghai Stock Exchange and the China Financial Future Exchange set up the China Europe International Exchange in 2015, the first dedicated trading venue for China and Chinese yuan-related investment products outside of the Chinese mainland.

“Establishing CEINEX is a major step towards connecting the capital markets of Frankfurt and Shanghai,” Tomm noted. In 2018, Haier Group, a company listed in Shanghai, became the first D-share company in Germany.

Tomm, who is also the co-chief executive of the CEINEX, shared a few details regarding the main prerequisites for Chinese companies to issue GDRs in Germany.

“First of all, the eligible issuer should be an A share company listed on Shanghai or Shenzhen stock exchanges," Tomm said. "From Germany's side, issuing GDRs under the China-Germany stock connect scheme is based on Deutsche Börse's existing, reliable listing regulations, and robust market infrastructure, the same as any other equity securities listed on the Frankfurt stock exchange.”

According to Tomm, the listing prospectus needs to be approved by BaFin, the German Federal Financial Supervisory Authority. A minimum reporting history of three years, a market value of EUR3 million, and a free float of 25 percent within the European Union and the European Economic Area are also needed.

Listing GDRs in Germany will offer Chinese companies an opportunity to list in the industrial and economic powerhouse of Europe, Tomm noted, adding that the German government, as well as the European Commission, are establishing a new and more attractive listing regulation with the objective of creating an even more enticing and strong European capital market, showing the great potential of the China-Germany stock connect.

“This year is the 50th anniversary of diplomatic relations between Germany and China,” Tomm said. “On top of that, German Chancellor Olaf Scholz visited China earlier this month, sending a strong signal to the market that collaboration will continue.

“The Deutsche Börse Group and CEINEX will remain committed and engaged to building the bridge between European and Chinese capital markets and will keep supporting Shanghai to accelerate itself to a global hub,” Tomm added.