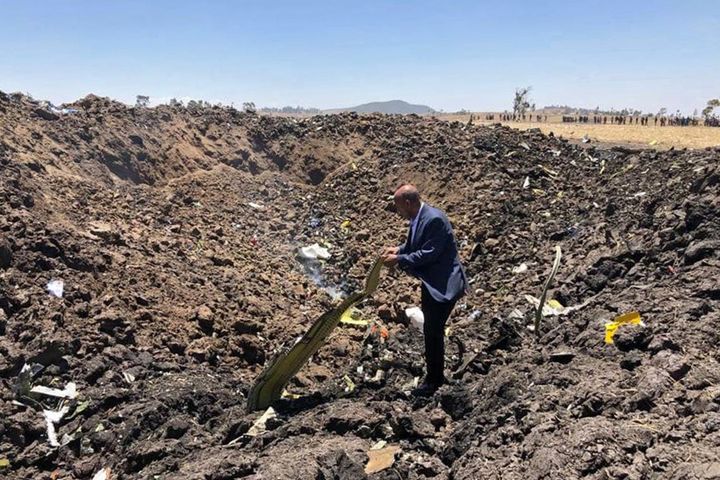 (Yicai Global) March 11 -- China's civil aviation regulator has suspended the use of Boeing's latest passenger aircraft model due to the second accident in less than six months. A brand new Boeing 737 Max aircraft crashed near Addis Ababa in Ethiopia yesterday and killed 157 passengers and crew members, eight of them Chinese.

The Civil Aviation Administration of China has ordered the nation's aviation firms to stop using Boeing 737 Max planes by 6 p.m., according to an announcement on its website today. Chinese airlines have 96 such planes and they have replaced them with Boeing 737-800s on many routes today.

The Ethiopian Airlines flight ET302 departed from Addis Ababa for Nairobi, Kenya, at 8.38 a.m. yesterday, and after six minutes air traffic control lost contact with the plane. The aircraft was delivered four months ago.

Boeing is "deeply saddened" by the deaths, the Chicago-based company said in a statement yesterday. A technical team will go to the crash site to provide technical assistance, it added today.

Launched in February 2018, the newest model in the company's bestselling narrow-body aircraft family has received over 5,000 orders as of this January. The firm had delivered 350 such aircraft at that time.

The same type of plane crashed in Indonesia last October and killed 189 passengers and crew. The two black boxes on the Lion Air JT610 flight have been found but investigation results are pending.

After the previous accident, the plane maker warned all airlines operating its 737 Max that a new feature in the plane may cause a dangerous nosedive due to a malfunctioning sensor.