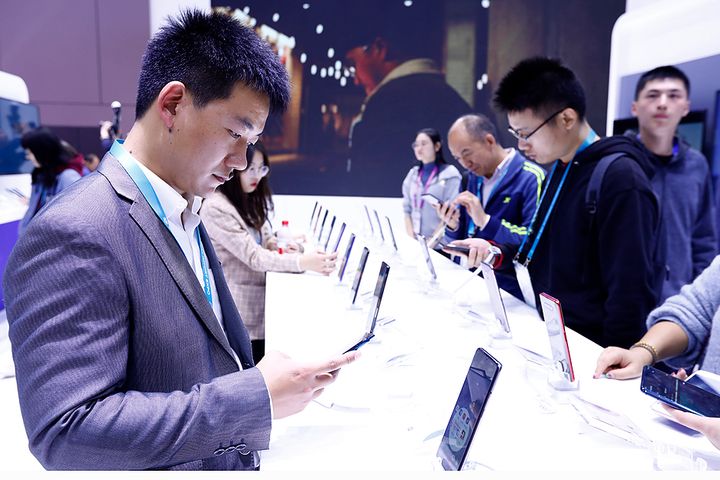 (Yicai Global) Feb. 20 -- Many of China's smartphone vendors and distributors are in danger of going out of business as a large number of brick-and-mortar retail outlets remain shut and people stay home amid the ongoing coronavirus health crisis.

The country's mobile phone sales dropped by between 50 and 60 percent over the Chinese New Year holiday, according to Ming-Chi Kuo, an analyst at Tianfeng Securities. Around 60 million units cannot be shifted, he added.

"Normally sales are better than usual over the holiday," Liu Kai, a cell phone wholesaler in Shenzhen's Huaqiang North Commercial Area, told Yicai Global. "This year, though, no money can be made because shops remain shut and shopping malls are also putting off re-opening, thus threatening everyone's survival."

No one is sure when the main shopping centers will be back in business. Some have delayed opening until March 7. Many vendors are marketing their wares by alternative means to try and drum up business. Liu is now selling his products on live-streaming platforms.

Earnings in the first three months of the year can sometimes make up half of the entire year's profit, according to cellphone vendor Wang Gang. Now retailers are finding it difficult to see a way out. With a large number of fourth-generation handsets in stock, it is hard to drop your price, he said.

"The inventory turnover period for smartphones is now more than two months, whereas usually it is around one month," said Li Rui, chief executive of consulting firm Nordwave Research. If the turnover period exceeds three months, it will be difficult for distributors to pull through, he added.

This has led to very large stocks of handsets, most of which are in the medium price range of between CNY2,500 (USD357) and CNY3,000, according to an anonymous analyst. However, it is mainly physical sales channels that have been affected. Online sales remain relatively robust.

To ease their plight, smartphone makers such as Huawei Technologies are relaxing their criteria for franchises and no longer dictating delivery quantities and sales targets. State-owned carriers China Telecom and China Mobile are offering special policies and reductions in rent to ease pressure on brick-and-mortar retail outlets.