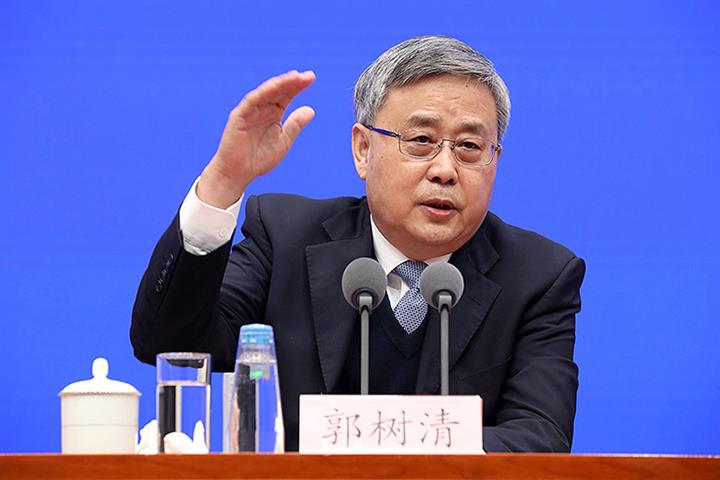 (Yicai Global) March 2 -- China has curbed its property market bubble after mortgage growth was less than for other loans for the first time in eight years in 2020, according to the country’s top financial regulator.

But the real estate market still has a strong financial tendency and is prone to bubbles, Guo Shuqing, chairman of the China Banking and Insurance Regulatory Commission, said at a press conference today.

Many people buy property for investment purposes rather than to live in it, he said, adding that that is quite risky because their financial situation would suffer if the market fell. Banks would subsequently be unable to recover the loans and interest, Guo said, so it is necessary to promote the property market’s stable and healthy development.

China’s yuan-denominated real estate loan balance was CNY49.58 trillion (USD7.66 trillion) as of the end of last year, up 11.7 percent from 2019, and the loan balance of financial institutions totaled CNY172.75 trillion (USD26.7 trillion) in the same period, rising 12.8 percent, according to data from the People’s Bank of China.

Regarding internet banking, Guo said that the scale and scope of internet platform participation in finance in China is the largest in the world. The country also has achieved positive results, especially in providing digital credit, digital insurance and other services to micro, small and mid-sized companies, in which China is the most advanced globally.

The CBIRC chief noted that internet banks have achieved many innovations which are significantly helpful in driving China’s services to micro and small firms to be the best on earth. “We encourage such innovations,” he said.

“We don’t think internet banks will meet any restrictions in or be unsuited to any financial businesses,” Guo said. However, internet banks must be regulated according to the same rules and laws as the financial industry. Internet banking institutions will have a healthier development after adjustments are made, he said.

Local governments have largely controlled the incremental risk of hidden debts and are proceeding in an orderly manner to reduce outstanding debt risks, Guo said.

The financial leverage ratio has plunged and the blind expansion of financial assets has been fundamentally reversed, Guo noted. Assets in the banking and insurance sectors rose at an average annual rate of 8.3 percent and 11.4 percent, respectively, from 2017 to last year, with about half of that from 2009 to 2016, he added. The proportion of idling interbank assets in the financial system has fallen sharply, Guo said.

The country is making great progress in identifying and disposing of non-performing loans in the banking sector, clearing CNY8.8 trillion of NPLs between 2017 and 2020, more than the total of the previous 12 years. The shadow banking system is being dismantled in an orderly way, and is down by around CNY20 trillion from its peak.