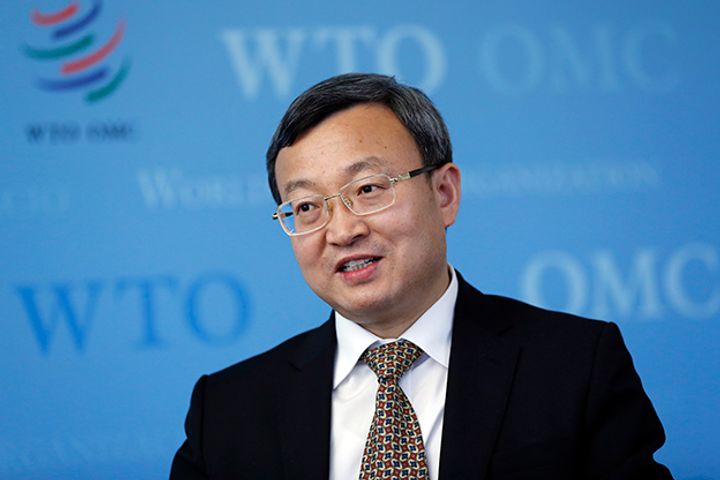 (Yicai Global) July 12 -- China is a committed supporter of the multilateral trade system, the People's Daily reported Wang Shouwen, the country's vice commerce minister and head of China's delegation to the World Trade Organization as saying, adding that the country has been actively involved in various WTO operations, duly fulfilled its obligations as a member.

On the 40th anniversary of the national reform and open-up program, the Chinese government reiterated its commitment to thoroughly deepening reforms, raising the standards for market opening, and building a community of common destiny with other countries based on shared interests and interdependence to promote mutual development, Wang stressed in the keynote speech.

China will continue to firmly support the multilateral trade system, and respond to issues arising during the economic globalization process in collaboration with other WTO members, allowing more nations and people to share the opportunities and benefits brought by globalization.

Since the last policy review session, the Chinese government introduced a series of measures to promote trade and investment liberalization and facilitation, including substantial customs tariff cuts, he noted. As of the end of last year, taxes were lowered for products in more than 900 tariff items, and the trade-weighted average tariff had fallen to 2.4 percent, followed by another round of import tariff cuts for 1,695 items in May and July.

China has consistently broadened market access for foreign businesses, he added. In terms of the financial sector, the foreign shareholding limit for joint ventures has been increased to 100 percent for banking institutions, and to 51 percent for securities, asset management, futures and life insurance companies. Foreign investors will be allowed to own a 100 percent stake in any companies in the financial industry by 2021, meaning that the sector will be fully deregulated for foreigners by then.

In terms of manufacturing, China has lifted foreign ownership limits for shipbuilding, aircraft, special-purpose vehicle and new-energy vehicle companies, and those for commercial vehicle and passenger car businesses will be abolished in 2020 and 2022, respectively.

Trade policy reviews, multilateral trade negotiation and dispute settlement mechanisms are the three central pillars of the WTO. With the trade policy review mechanism, members' trade policies and policy enforcement are monitored and thoroughly assessed on a regular basis to enhance policy transparency and ensure member states' compliance with WTO rules and commitments and with their respective obligations and responsibilities. Resolutions adopted at review meetings are not legally binding, but they can inform of public opinion in the international community and therefore play an important role in terms of maintaining smooth operations of the multilateral trade system.

Under the current rules, trade policy reviews are conducted once every two years for the four largest members by trade volume -- China, the US, the EU and Japan; once every four years for members ranked five to 20; and once every six years for other members. Following an amendment to the review rules last year, the WTO changed the review cycles to three, five and seven years respectively, effective 2019. China has passed six policy reviews since its accession to the WTO and participates in more than 20 reviews of other members every year.