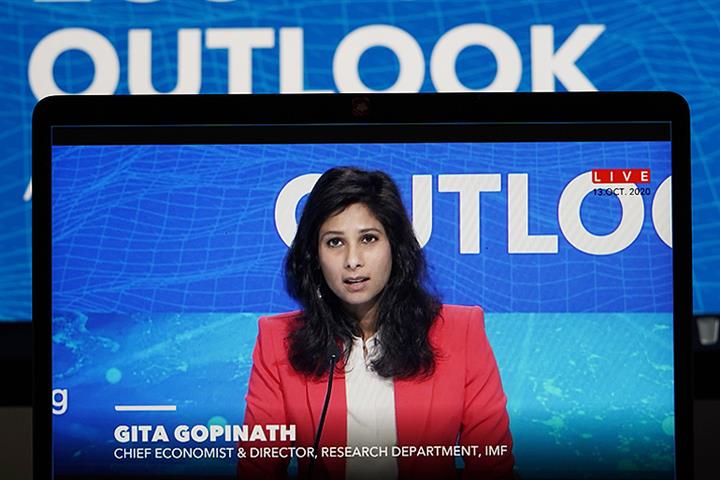 China Is Still Only Major Economy Expected to Grow This Year, IMF Says

(Yicai Global) Oct. 14 -- China will be the only major economy to expand this year, the International Monetary Fund reiterated as it raised its annual growth forecast for the world’s second-largest economy to 1.9 percent from a 1 percent prediction made in June.

“While the swift recovery in China has surprised on the upside, the global economy’s long ascent back to pre-pandemic levels of activity remains prone to setbacks,” the Washington-based organization said in its flagship World Economic Outlook published yesterday.

The IMF partly attributed its downgrading of the pandemic’s damage to the world economy to China’s faster-than-expected recovery. It now expects a global contraction of 4.4 percent, compared with a June forecast for a drawback of 5.2 percent.

“We are projecting a somewhat less severe though still deep recession in 2020,” the IMF said in the quarterly report. “The revision is driven by second quarter GDP outturns in large advanced economies, which were not as negative as we had projected; China’s return to growth, which was stronger than expected; and signs of a more rapid recovery in the third quarter.”

Economists at Chinese financial institutions polled by Yicai have also raised their forecast for China’s economic growth this year. On average they expect GDP to gain 2.37 percent, according to the latest Yicai Chief Economist Survey issued on Oct. 12.

Global trade began to recover in June as border controls eased, and the IMF cited China as an important contributor to that revival. The country will announce its third-quarter gross domestic product data on Oct. 19.

China’s GDP fell 6.8 percent in the first quarter, the first contraction since the country began publishing such data in 1992, but rose 3.2 percent in the second quarter. Economic data since then show robust activity in both the manufacturing and services sectors.

The IMF left unchanged its 8.2 percent growth forecast for China next year.

“There are both downside risks and upside risks,” she said. “The virus is resurging, with localized lockdowns being reinstituted. If this worsens and prospects for treatments and vaccines deteriorate, the toll on economic activity would be severe and likely amplified by severe financial market turmoil.”

“The growing restrictions on trade and investment and rising geopolitical uncertainty could harm the recovery,” Gopinath added. “On the upside, faster and better news on treatments and vaccines or further policy stimulus can significantly improve the outlook.”

After rebounding next year, global growth is expected to lose steam to about 3.5 percent mid-term, according to the IMF.

“It means that over the medium term we have a projection of a permanent loss in output pretty much everywhere in the world,” Gopinath noted. The total loss in output relative to the pre-pandemic projected path will jump to USD28 trillion by the end of 2025 from USD11 trillion over this year and next, she said.