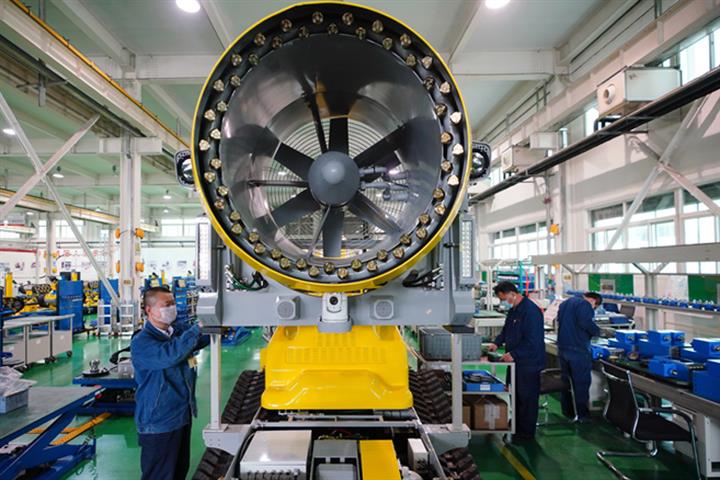 (Yicai Global) June 30 -- China’s official gauge of activity in its manufacturing sector gained for a fourth month in a row this month, but supply continues to exceed demand, analysts cautioned.

The purchasing managers' index for manufacturinginched up to 50.9 this month from 50.6 last month, according to data released today by the National Bureau of Statistics. A reading above 50 indicates expansion, while one below reflects contraction.

Factory output continues to expand as evidenced by an increase in the production sub-index to 53.9 in June from 53.2 in May. It has stayedabove 53 since February.

While the headline figure shows that China's economic recovery has accelerated, the pick up in demand is lagging behind, said Zhang Liqun, an analyst at the China Federation of Logistics & Purchasing.

Over half of the companies interviewed reported lackluster demand in the last four months, said Wen Tao, an analyst at the China Logistics Information Center. At 51.4, the domestic new order sub-index was lower than the production index this month, highlighting the large gap between supply and demand.

Import and export companies are also facing big challenges, Wen said. While the rate of declining orders from abroad is slowing, the new export orders sub-index remains below par at 42.6 despite a 7.3 percentage points jump from May. That indicates that businesses in Europe and the US are getting back to work.

Conditions outside China are still very severe, and whether the positive changes in the foreign trade-related sub-indexes can be sustained remains to be seen, Zhang added.

The PMI for small companies fell 1.9 percentage point to 48.9, indicating that they continue to struggle. China should continue to be implement supportive policies for micro and small businesses to help them survive, Wen said.

Medium and large-sized firms had continued growth with a PMI of 50.2 and 52.1 respectively, up 1.4 point and 0.5 point from the previous month.