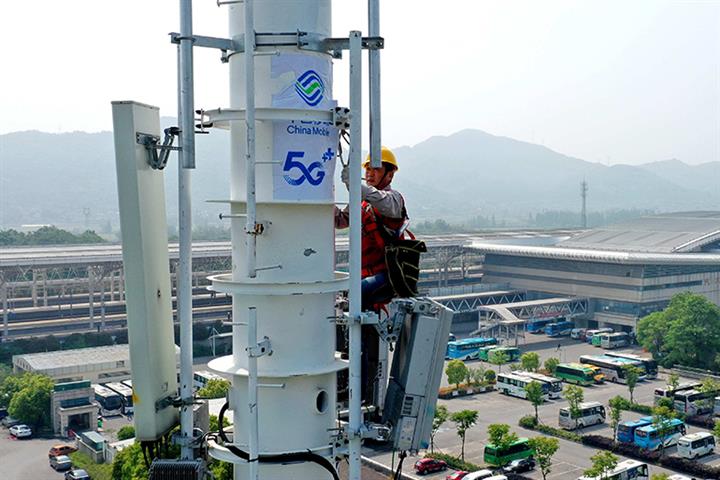 (Yicai Global) March 10 -- Telecoms carriers China Mobile and China Broadcasting Network plan to complete the construction of 400,000 700 megahertz fifth-generation base stations by the end of this year, China Mobile said at a press conference today, according to The Paper.

Prior to this, the pair had reached a 5G strategic cooperation agreement on Jan. 26 to launch joint construction and sharing of a 700 MHz 5G network, with each party investing half for the new construction, expansion and renovation. Meanwhile, China Mobile will share its 2.6 gigahertz 5G network with CBN for a fee.

The 700 MHz frequency is considered ideal for 5G, as it has low propagation loss, wide coverage and low networking costs. The number of base stations required for 700 MHz is a fifth of that needed for 2.6 GHz, one sixth of that for 3.5 GHz and a ninth of that for 4.9 GHz. The 700 MHz band also has advantages for 5G universal coverage in rural and remote areas.

China granted a 5G license for the 700 MHz frequency to CBN, the country’s fourth telecoms operator, in June 2019. The other three obtained 5G licenses for 2.6 GHz and 4.9 GHz. Founded in 2014, Beijing-based CBN is the most recently established, so lacks users and infrastructure, which is partly why it is cooperating with China Mobile on 5G.

China Unicom and China Telecom had also hoped to participate in 5G construction with the 700 MHz frequency band. Zhang Yunyong, a member of the National Committee of the Chinese People's Political Consultative Conference and general manager of China Unicom's product center, proposed at the recent Two Sessions that 700 MHz could be used to build a nationwide low-frequency 5G shared access network for rural areas, shared by the four telecoms firms, to avoid duplication of construction.

Compared with 3.5 GHz, the 700 MHz band can help reduce investment in wireless equipment, optical cables and transmission systems by about CNY190 billion (USD29.2 billion), and could save CNY20 billion in electricity and rental operating costs each year, if there is a 5G network with the same level of coverage as the existing 4G network, Zhang said. Such a saving is more than the total annual net profit of China's three major telecom operators, he added.