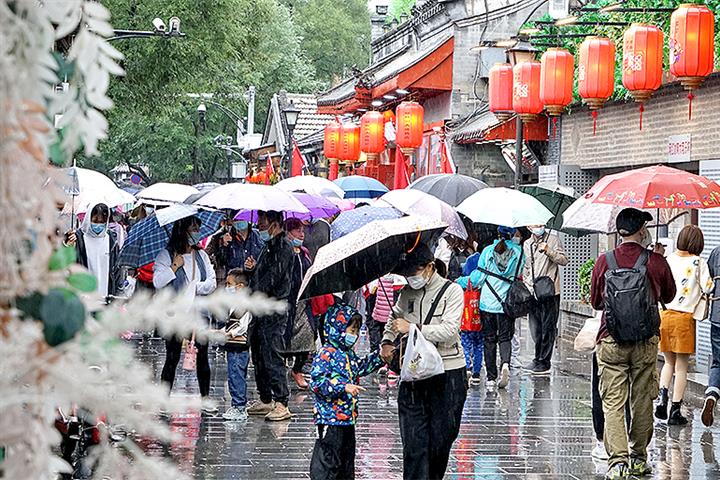 (Yicai Global) Oct. 8 -- China’s revenue from domestic tourism over the National Day holiday climbed back to 60 percent of what it was in the same period of 2019, before the outbreak of the coronavirus pandemic.

Despite the impact of recent Covid-19 cases, income from tourism hit CNY389.1 billion (USD60.4 billion) between Oct. 1 and 7, down 4.7 percent from a year ago, according to data the Ministry of Culture and Tourism released yesterday.

Over the week-long break, 515 million trips were made, reaching 70.1 percent of the pre-pandemic level, but 1.5 percent down from a year ago, the data showed.

Spending on catering, accommodation, tourism, entertainment, and travel during the National Day holidays rose 29.5 percent and 51.6 percent from 2020 and 2019, according to a report from online consumer platform Meituan.

New movies released over the holiday had taken more than CNY4.2 billion (USD651 million) at the box office as of 3 p.m. yesterday, and are expected to break the CNY4.8 billion record set in 2019, according to ticketing platform Maoyan Entertainment. Box office income during the same period last year was CNY4 billion.

Duty-free sales on China’s southern island province of Hainan continued to boom, topping CNY1.3 billion, up 82 percent from a year ago. Hainan sold 1.8 million duty-free items to 152,000 shoppers, an increase of 154 percent and 66.7 percent, respectively, according to Haikou Customs. Sales hit CNY274 million (USD42.5 million) on Oct. 6, a record high for a single day.

Hotel bookings in Beijing jumped 57 percent, and the average price per night for a room was CNY598 (USD93), about CNY100 more than a year ago, Qunar said.