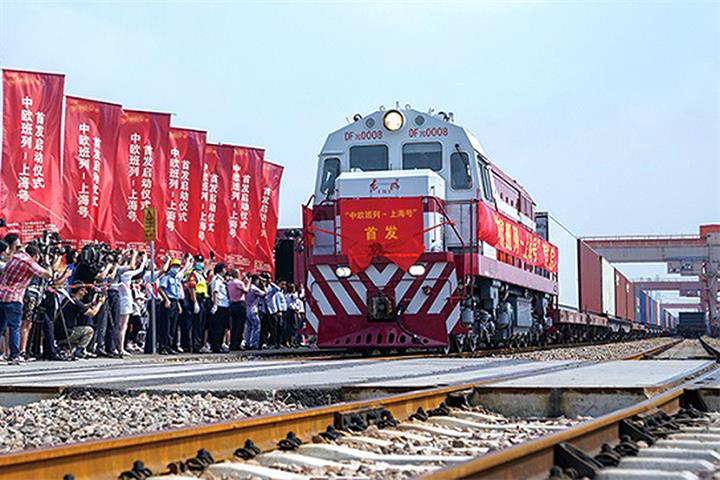 (Yicai Global) Oct. 8 -- An increasing number of exporters and importers in China and Europe are resorting to cargo trains amid tight maritime logistics but infrastructure upgrades are needed to make the solution more attractive.

From January to August, the number of China-Europe freight trains jumped by 32 percent to 10,052 from a year ago, according to data from the National Railway Administration. Meanwhile, the tally of delivered twenty-foot equivalent units went up 40 percent to 967,000 from a year earlier, based on official data.

The fastest growth was found in western China. In the first half, western regions boosted their train transport capacity by 51 percent from a year earlier, according to official data. The increase was 41 percent in eastern China and 27 percent in central China.

Trains have some advantages over ships. Delivery times on the China-Europe route have been cut by about two weeks, said Chen Zheng, general manager of Shanghai Nutex Import and Export. Moreover, train transport is relatively affordable. A 40-inch freight train container costs about USD11,000 but an exporter would need to pay nearly USD20,000 to ship a container to Europe, Chen added.

However, trains are not nearly as powerful as ships. China's ports handled 160 million TEUs in the eight months, according to the Ministry of Transport. In comparison, trains carried 964,000 TEUs, involving almost one million containers, which put the whole system under a lot of pressure.

Trading companies are struggling with a shipping container shortage. That has caused many seasonal items for Christmas to be left unsent in August and September. Dongyang Weijiule Crafts, a Chinese firm specializing in Christmas decorations, is considering using trains to export some goods to Russia and the Middle East, said Qiu Xuemei, general sales manager.

Busy trading has caused traffic jams on the tracks. In July and August, China State Railway Group cut the number of Europe-bound freight trains of various operators due to congestion, said an employee at a logistics company.

The bottleneck lies in infrastructure, Wang Guowen, head of a logistics center under China Development Institute, said to Yicai Global. Solving the issue of track transfer between two different types of gauges requires a change of equipment and facilities, he added.

One solution would be completing the switch already in China, according to Wang. Russia uses broad gauges whereas China has adopted standard gauges. China could also enhance the domestic infrastructure by building bridges and tunnels, he added.

Some technical improvements should already be seen. Renovation of ports of entry in Alashankou and Korgas in the Xinjiang Uyghur Autonomous Region, as well as in Erenhot and Manzhouli in the Inner Mongolia Autonomous Region, has increased transport efficiency this year, according to China State Railway.

Traffic is becoming more balanced with rising importing from Europe. Some 85 percent of all dispatched freight trains returned to China from Europe, the highest ratio since the launch of the express route in 2011.

One firm in the sector had interesting insights. From January to September, the number of China-bound trains that YXE China Express operated rose by more than 15 times to 234, according to the company that has a 12-percent market share. The number of trains to Europe climbed by 24 percent to 770.

The upcoming China International Import Expo should extend the trend into this month. On Sept. 28, a freight train named “Shanghai” departed from Shanghai for Hamburg, Germany, for the first time. The train will return to Shanghai in mid-October, expected to be carrying large industrial machinery for the annual expo.