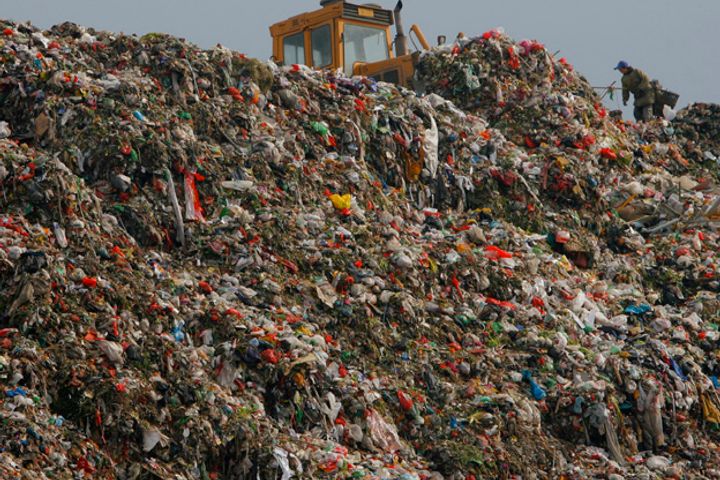 (Yicai Global) Aug. 10 -- The foreign garbage ban that has been in place for a year has mostly impacted the plastics recycling trade, though other fields have felt the heat as well. The sector is gradually adapting, but companies are still struggling to seek domestic sources.

The new version of the imported refuse management standards released on April 18 moved 16 categories of solid waste such as industrial plastics from the restricted list for use as raw materials to the catalog of waste material forbidden from import, which will be implemented by the end of this year.

This means the import of waste plastics has gone from restricted to totally banned, and the operating mode the domestic plastics recycling industry has plied for decades will completely change," said Wang Yonggang, secretary general of the China plastics recycling branch of China National Resources Recycling Association.

The shortfall of raw materials the foreign garbage ban has caused has hit plastic recycling firms hard. About 30 percent of these have opted to stop production and change to a different business. Some have set up their own recycling systems for made-in-China rubbish, while others have set up factories overseas to process waste plastic into raw materials and then import these into China to sidestep the prohibition, Wang noted.

Tightening domestic environmental policies have also applied the brakes to waste paper, scrap metal and other fields. Under this increasing pressure, the level of pollution control has greatly improved, and industries and enterprises have gradually migrated into industrial parks and transited to a modern circular economy.

The recycling sector is also gravitating onto a standardized, orderly and sustainable development track.

The foreign trash ban has greatly impacted the domestic renewable resource processing industry short term, but the long-haul trend is to to bar the import of foreign garbage outright, industry insiders said, adding that it is thus imperative for domestic recycling to pick up the slack.

The key to transforming the industry crisis into an opportunity for industrial upgrading is to encourage the renewable resources industry to turn onto a transformational development path with domestic solid wastes as the main raw materials, promote the development of recycling systems, and activate the market with government guidance to force increased efficiency of garbage collection and recycling of renewable resources, noted Liu Jianguo, a professor at the School of Environment at Beijing's prestigious Tsinghua University.

"From a regional perspective, in addition to China, Southeast Asian countries are also tightening their regulation of imported waste plastics. We believe that the future development of the industry will be based on localization, which places higher requirements on the construction of a renewable resource recovery system," Wang said, echoing Liu's view.

The State Council, China's cabinet, officially issued an implementation plan for the foreign rubbish import prohibition in July last year. This program, seen as the most rigorous foreign garbage ban in history, has drawn wide attention.

China's economy has developed rapidly since the 1990s, and objectively needs import of some solid waste to alleviate its shortage of raw materials. The nation's solid waste imports have continued to grow for many years, but show a downward trend after reaching a peak of 59 million tons in 2012, per customs statistics.

The country is  the world's largest waste plastic recycling markets. It has also passed the US to become the world's biggest municipal solid waste generator, per a World Bank report, churning out 190,000,000 tons of MSW in 2004, a pile projected to reach at least 480,000,000 tons per year by 2030.

The trouble is, garbage sorting initiatives that have proven successful in other countries have largely fizzled in China. The problem is thus very much a case of water, water everywhere, but not a drop to drink.

Public education will prove crucial if China is to ever clean up its own backyard and at the same time tap the potential goldmine its recoverable refuse represents.